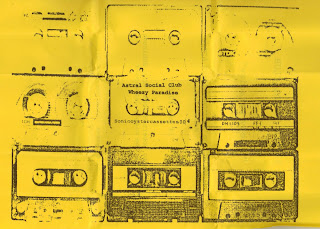 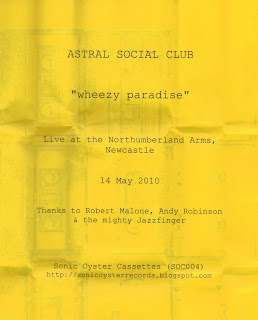 Just spent a pleasant while listening to the latest release by Astral Social Club. "Wheezy Paradise" on Sonic Oyster Cassettes. "Wheezy" is a live recording from a 2010 performance at The Northumberland Arms in Newcastle, not a mixing desk recording either..there's lots of shouts, chit-chat and clapping during "Wheezy Paradise", which I prefer. (Not many Geordie accents in the crowd though.....).
It is a pro-dubbed tape, but I reckon it's a C46 - 23 minutes a side. Side A starts off with electric guitar, stuttering the theme tune to "Chigley" before getting interrupted by whooshing synth sounds panning the room, and then before my brain could communicate with my ears I was locked into a multitude of hypnotic loops. It was like I was listening to moto-perpetuo. Frippertronics. Robert Fripp had entered the building! Classic Campbell, beautiful sound. The "come down" is back to a stuttering guitar before some mutated 1970's soft rock a la Marshall Hain, Starship or Heart is crudely looped. This ends side A. I had a thought that this "piece" of "Wheezy" might have meant to be a "bridge of sorts" between tracks but Neil went with it for a while. The beauty of improvised noise. Could be wrong - usually am. Side B begins where Side A finished. The first five or six (great band) minutes are messy. A Cabaret Voltaire rhythm hidden by a multitude of synths. The sound doesn't really go anywhere - and then, out of the blue a pulse, a throb, that Chris Carter would be proud of enters the room and the journey begins again, this time with TG 'esque' improv. sounds. (Think 1970's TG not the 21st century re-incarnation). Twenty or so minutes later it all collapses to much whooping and a-hollering. A great Astral Social Release.
"Wheezy Paradise" is limited to 50 copies only, packaged in a wrap-round A4 sheet of paper. Available from Volcanic Tongue and Norman Records in the UK. Highly recommended. There's a new studio Astral Social Club LP in the pipeline too, and an LP by Neil Campbell's old 1980's Goth Band ESP Kinetic due out on Harbinger Sound in the summer. Busy year so far for Neil.