Getting It Out Of Your System 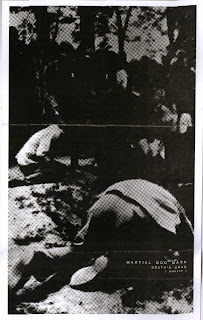 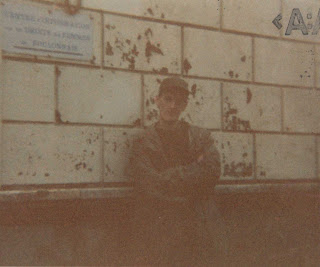 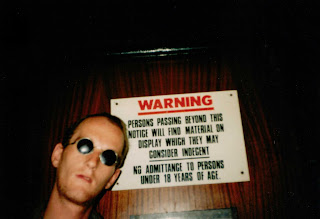 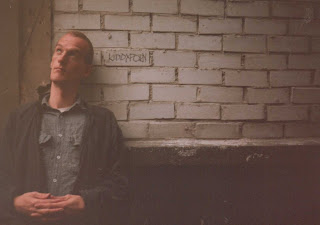 The first band I was in were called The System. This was in 1977. It was my band, my imaginary band. Whenever I donned the headphones and cranked up the Amstrad Hi-Fi to 11 put my guitar strap over the shoulders I became "The System". We were a good band - did all the classics. Why The System? It is from the Gloria Mundi song "Victim". "Hypocrisy, it's all hypocrisy to get you and me to fit this system". Great song. Sounded vaguely menacing, vaguely political. I was very vague on politics at the time getting most of my knowledge and way of the world through "Look-In" magazine, and the odd music weekly. I did once give a pound to CND for a badge, and bought a copy of the SWP paper from a vendor in Scunthorpe market one Saturday, I really wanted a Anti Nazi League badge but he wasn't selling any. I graffitied my local village with The System logo. A big question mark with The System written through the straight stem. Cool. It stayed in the 'phone box by a place called "The Conker Trees" for bloody years...becoming a personal embarrassment in later years....but no-one knew it was me. The System never ventured further than my bedroom.

Last week I bought the cassette "Death's Head" by Martial God Mask. It's not a bad tape but it did remind me (very much) of an old track of mine from 1986 called "We Pissed A Piss That Was Pure". "Death's Head" is a 30 minute piece in four parts, "We Pissed A Piss" was a thirty minute epic. Like I said, the sound is very similar. I had two Korg Synthesizers running on white & pink noise, one going through a DOD Sonic Distortion Pedal, I stuck a microphone out of the "studio" window to record street sounds (Monks Road, Lincoln) and mix it all in. Recorded it live onto a TEAC 244. Quite often I'd let the machines play themselves and walk around the room, sporadically clenching the fist. I haven't heard the track in 25 years - there was only one copy on cassette and that has long gone. Shame, but the Martial God Mask cassette brought it all back to me. I imagine Martial God Mask to be a one-man outfit with a table of effects pedals and a primary noise source. It doesn't sound like laptops. I am not saying that "Death's Head" sounds dated nor am I saying that I back in 1986 was years ahead of my time, I am just drawing on similarities in the sound. The artwork too is of an age when.... Which is why I think Martial God Mask might be the project of a young chap. (Could be wrong and at 48 most chaps are young chaps to me). The sleeve of "Death's Head" is of men being shot in the back of the head and falling into a mass grave, one that (undoubtedly) they have dug themselves. Could be a Balkan, Soviet or German atrocity. Victims and aggressors. Uncertain, but very tired and unnecessary in 2011. Surely a better image could have suited the sound - or perhaps Martial God Mask were just getting it out of their system with this being first cassette release and all?

Back in 1986, and when I was recording "We Pissed A Piss That Was Pure" I was using the moniker A:A:K. It was my solo project whilst being a member of I.B.F. (Ideas Beyond Filth) - we went for the abbreviated to a letter in those days. A:A:K was a noise project, although back then it would have been called "Industrial Music". I was living on a diet of electronic / industrial sound at the time, had been for five or six (great band) years and through A:A:K I was producing my own interpretation to what I had learnt in the great information war. The fascination at that time (thanks to artists such as Throbbing Gristle, Psychic TV, S.P.K., Nocturnal Emissions, Crass, Boyd Rice, Whitehouse amongst others) was with sub-culture, and what really went on in the world - not just the tabloid/BBC/ITV/government tales, so I had an interest in war and the politics thereof, of the occult, the media blackout of information, of atrocity and murders by person and persons unknown. My life interests were begining to shape. In 1986 everyone I knew had a book by Colin Wilson, Aleister Crowley and David Yallop on their shelves.
Previous to A:A:K I had recorded a couple of tapes under the name of The Streetcleaner. I have mentioned this elsewhere on this blog. The Streetcleaner was a knee-jerk reaction. A:A:K was more cerebral a project, but still I used the imagery of serial killers, medical operations and soft pornography to accompany the tapes. "No Hard Feelings", "Death Blow" and "Sa-Dis' ". I was simply getting it out of my system and perhaps Martial God Mask is doing just the same? But then again...perhaps not.
A few years back (1998) I was at the house of EE Tapes and Eriek (EE Tapes head honcho) picked up a cassette he had just received, it was in an A5 wallet and the sleeve was a black & white collage of a foetus wrapped in barbed wire. Eriek tutted, showed me the cover and (correctly) threw the tape in the bin. I think of this whenever I see tired or languid imagery accompanying a release.

It is a damn fine tape though, limited to 50 copies only. Released by Dead Wood Recordings and available for £1. I have #47 so it has probably all sold by now but give Rich Nook at deadwoodrecordings.co.uk and see what reply you get.