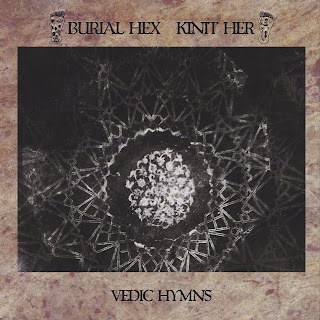 It was this month last year that I started the mission to get hold of as much Burial Hex as possible. I had witnessed a great live performance (in 2009 in London) and just heard the Brave Mysteries released cassette "Fantasma Di Perarolo" and thought it time to hear more of the mind and works of Clay Ruby.
So a year has passed and I now have a great selection of tapes, CD and vinyl. I must admit that not all is to my liking, but one bad album, "In Girum Imus Nocte Et Consumimur Igni" out of half a dozen is a sign of an artist worth following, and "The Tower" 7" on Release The Bats label was one of 2010's "singles of the year". I was in correspondence with Graham from the Alt.Vinyl label and it came to my notice that he had found a spare copy of the (sold out) Alt.Vinyl released LP "Vedic Hymns" by Burial Hex and Kinit Her. I bit his hand off for a copy! Earlier in the year I found a copy of the Kinit Her 8" Lathe Cut EP that Alt.Vinyl released but unfortunately the vinyl doesn't play. I have three Lathe Cuts on the Alt.Vinyl label and none of them play. My needle simply jumps, skips, scratches and farts its way across the vinyl. I have other Lathe Cuts - like the Lathe Cut series that Harbinger Sound released a few years back; Mo*Te, Culver, Government Alpha and an excellent double 7" Lathe Cut by Putrefier on Birthbiter - they all play fine, but the Alt.Vinyl releases....no. Never mind. "Vedic Hymns" is a proper press.
"Vedic Hymns" are the words of Gustav Holst set to music. Gustav wrote nine hymns based on the Vedic Civilization of India in the early 20th Century. The album presents five.
Burial Hex has two tracks on side one. These are the first Burial Hex tracks I have heard with Clay Ruby vocals. The first track ; "God Of War And Battle" is built around the piano. Clay plays the piano like I play the piano, pretty random and free-form (Just as an aside. The piano on the Dieter Muh track "Bethlehem" that appeared on the compilation album "8", released by Carnifex Recordings & Harbinger Sound, was played by Tamsin Cammack). The vocals sound like Clay is belching his way through the alphabet. I was not expecting that! Same with the second piece; "Stormclouds", the vocals are shouted by a man in excruciating pain, it kind of ruins the piece. The words are printed on the sleeve - so small and compact that I can't make head-nor-tail, but then it is not actually sing-a-long-a-hex here. Kinit Her own side two. They provide three tracks and whereas Clay played the piano, Kinit Her provide strings to the lyrics. The music is folk, not the neo-folk folk that seems to be played by people dressed as Mussolini's postman and telling tales of old Albion, this is folk of Collins, of Comus and (Fairport) Convention. With a little Jake Thackery thrown in by the way of guttural vocals. Clay also belches and screams for Kinit Her.
I am disappointed with the album, but I shall still carry on my mission.
Clay is performing live in Europe later in 2011, hopefully the UK is on his itinerary.
Posted by Steve at 10:51