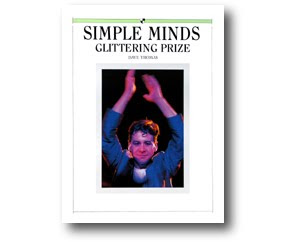 One of the great rediscoveries last year was Simple Minds "Reel To Real Cacophony" album. From the moment I put it in the CD player and pressed play to hear that simple drum machine sound through plenty of reverb start the rhythm and Jim Kerr's voice, I was back in a time. Quite simply a classic LP and for me the only decent record Simple Minds ever made. Over the Christmas period I begun to wonder why? Their first LP wasn't up to much, only one decent track "Chelsea Girls", and the release that followed "Reel To Real": "I Travel" was lightweight rubbish. Then they signed to Virgin, hit the new romantic zeitgeist and that was that.....
I decided to find a book about Simple Minds to find out why. There are a few Simple Minds biogs on the market, I thought it best to find one that covered the early days, the Arista years rather than one that wallowed in the Stadium Rock days and Nelson Mandela/Belfast Child era. I plumped for a book that came out in 1985. They were big by then - but not mega big. I found "Glittering Prize" by Dave Thomas for the princely sum of 22 pence.
Not a good read. Non of the members of Simple Minds were approached for the book, instead Dave uses NME, Smash Hits, No.1, Record Mirror quotes to find the story of the band. Rather like the Bauhaus book I mentioned earlier it seems to be written for teenage Jackie readers, fair enough. It did unearth some interesting facts like Johnny & The Self Abusers split in to two bands. Simple Minds & The Cuban Heels. I never knew that. I quite liked The Cuban Heels back in the day, I remember having a track of theirs on cassette - off John Peel I think....must have been, back then all my cassettes were off John Peel!
After their first LP ("Life In A Day") Simple Minds had no songs, so they holed up in a studio and experimented with the equipment and produced "Reel To Real Cacophony". Tracks were work in progress, lyrics were abstract lines, snapshots, meaningless therefore meaningful. An album of no hit singles or commerciality.
Arista soon dropped Simple Minds. Members left. It was a different Simple Minds that signed to Virgin Records and produced the hits. Jim Kerr and Charlie Guitar Player come across as very arrogant folk, but then again, only previously published interviews are being used therefore the quotes are more likely to be journalists interpretations than horse's mouth.
I shall carry on playing the CD. It hasn't put me off the group at all, but I might give the book to the local Hospice Shop.
Posted by Steve at 15:17