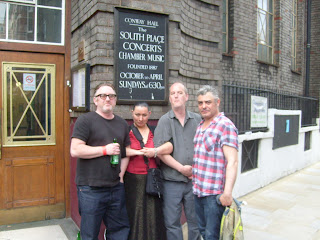 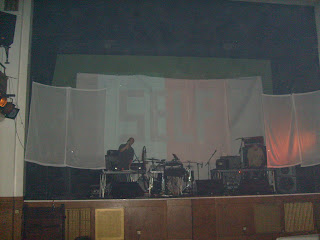 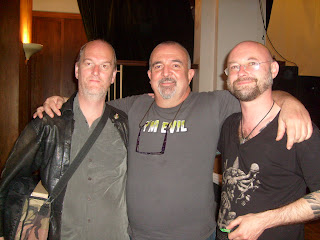 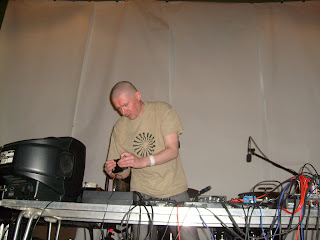 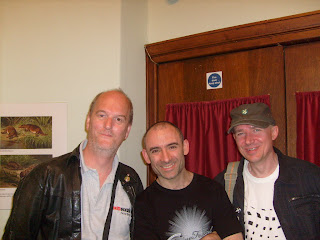 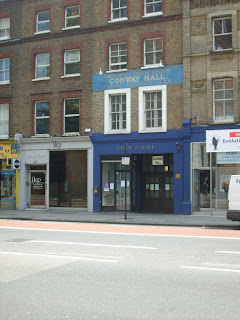 Live performance #39 for Dieter Muh was as part of the impressive Equinox Festival that took place in London in June 2009. Spread over three days and two venues we were to play the third and final evening at the Conway Hall. The festival was organised by Raymond S. Harmon, Andrew Hartwell (Aurora Borealis) and Simon Kane. It was Simon who invited us to take part. We had played at the request of Simon before, at his (in)famous "Salons" that took place in London.
I did not know at the time but this was to be the final Dieter Muh performance with Dave Uden as a member.
I went along to the second evening (also at Conway Hall) to watch Burial Hex and K11 knock out excellent sets and Comus to perform a poor one. The sound was awful. Not a good omen for the coming day.
Rather than write a summary of the Festival, I will concentrate on the Muh performance. Needless to say though, the weekend I spent in London in the company of Simon, Lydia, Andrew, as well as old friends; Mikael Prey, Barry Hale, Carl Abrahamsonn, Steve Underwood, Sylvie + Stephane was a weekend that I shall never forget. The sun shone brightly, the bar was cheap (thanks Jacques) and the conversations never stopped flowing.....
Any way.
Sunday, and all was running late. Very late. Our set had to be cut short to 30 minutes instead of 40 and Aethnor ate up all the soundcheck time so ourselves, Threshold House Boys Choir and The Anti Group could only line check. Poor old Pestrepeller didn't even get a line check, and because of the amount of sound equipment onstage they had to play on the floor.
We always start a performance with tape loops. Experience has taught us that it's a good way of (onstage) getting the levels right. We mixed "The Call" in with "We're Not Happy....Until You're Not Happy", it seemed right to have the voice of Lon Milo DuQuette booming out of the speakers at such an event. Dave had brought a long a rhythm, almost dance, almost techno but not quite right and to that I bellowed out lyrics that were to be part of the "Bethlehem" project. Now sadly to be unrealised. The journey in to madness continued with a more structured version of "Burning People", after performing it live at our last gig and having real fun with it we thought we'd expand on the improvisation. "Sea Sick With Sand" followed, a piece that Dave and I first recorded in 1987, our finale was a slow building bass pulse that became cacophonous with myself playing loops of scraped and bowed cymbals and Dave blowing his clarinet. We ended on 32 minutes. We performed to a new film made by Dave, but unfortunately I had my back to the screen so never got to see it.
At least we got to play our full set. The poor Anti Group were cut short after 20 minutes. I didn't get to see Aethnor, and Peter Christopherson was a treat to see. To be part of the event that staged The Threshold House Boys Choir was indeed an honour.

It is true to say that event lost money. Whether or not there shall be another Equinox Event still remains to be seen. It certainly was one of the best weekends of my life in the life of Dieter Muh. The version of "Burning People" was edited by Dave and is to be included on a compilation CD that will accompany the Tasmanian magazine "Night Science" that is put out by Cipher Productions. It was Dave's last involvement with Dieter Muh.