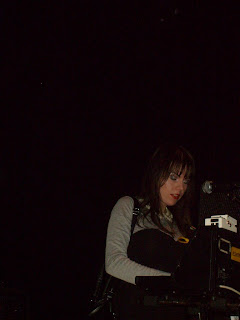 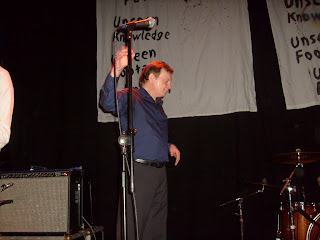 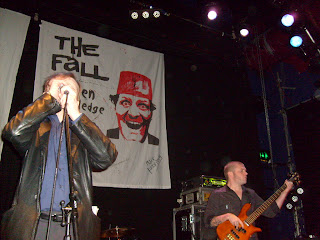 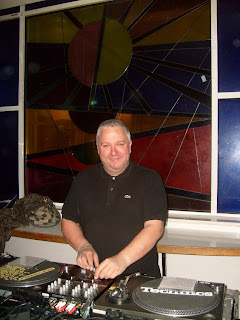 Truth be told, I kind of lost it with The Fall in the early 1980's. I was with them from the off, but after "Grotesque" LP I kind of lost interest. My favourite Fall releases are "Live At The Witch Trials" and "Slates". Classics. Since then they have put out the odd decent single; "Look, Know". "Bremen Nacht", "Free Range" springing to mind, but I don't know how many albums The Fall have released since "Hex, Enduction Hour"! Not long back, maybe 2008 I bought The Fall CD "Live From The Vaults:Retford 1979" on the Hip Priest label. Mainly because I was part of the support group that night. I was sound engineer for Collide (Lincoln's finest power-punk trio). I only found out about the CD because I was doing some home research on The Porterhouse, the venue it took place in. Google it, and up comes The Fall CD.
I have a friend who says that punk died the day Marc Riley left The Fall. He may have a point.
Since losing interest I have seen The Fall a few times, occupational hazard somewhat as I lived in Manchester for 7 years. The last two times (prior to this gig) were at York Barbican Centre, and when Brix walked on stage both me and the then Mrs. Cammack exited to the bar, and lastly at Leeds Uni. I think that was on the "Infotainment" or some such tour. (I should really do some research here). That was poor too, and would have headed back home but the person I had given a lift to was enjoying it so much I couldn't leave.
Anyhow. One of the better reads of 2009 was "The Fallen" by Dave Simpson, and after reading about Mark E Smith's treatment towards the latter members of The Fall intrigue got the better of me, so when it was announced that they were playing in Exeter (20 odd miles up the road) I put my name down for a ticket.
I got a lift from my friend Elliot. Elliot is a big Fall fan, preferring the later Fall to their earlier stuff. Elliot had never seen The Fall live.
It was £19 a to get in
Who were the support? Bunch of kids. Terrible. There was Dave Myers DJing in the bar, spinning 23 Skidoo, Pop Group, Gang Of 4 etc. Post Punk Dream DJ.
For some reason, about 5 minutes before The Fall came on I wandered right to the front of the stage and plonked myself and plastic pint pot slap bang in front of Mark E. Smith's mic' stand. The back drop was some crude lettering and a badly drawn picture of Tommy Cooper. No expense spared there then. On came the band and knocked out this tight rock riff. Keyboard player, stage right, quite attractive synth noodles over the thumping 4/4. On came Mark E. Smith to a warm applause.
It was all going well, I couldn't tell a word Smith was saying, he had the microphone so close to his mouth it was incomprehensible muttering. Perhaps he was trying to keep his false teeth in? There was no interaction with the other 4 members of the band, they all stared forward as if they were shit scared of their leader. Hired hands. Then Mark E. Smith started turning down amps, levels on the synth, moving microphones away from certain drums or speakers making the sound really poor. No reason in this madness. It was an action that was mentioned in the "Fallen" book, and how it used to annoy the members - so why does it happen, so the band knows who is boss (apparently). By now I am bored and know the bar area will be empty so I exit stage left. Wrong about the bar! damn.
With no interaction with band or audience Mark E. Smith left the stage after about 40 minutes never to return. Poor. Very poor. Every time I see The Fall I say to myself - never going to see them again. (I said the same thing about Psychic TV in 1987, and I'd love to see them now)!
What did they play? No idea. Piss poor version of "Psychick Dancehall is all I recognised. To be honest, Mark E. Smith should be dressed in a teddy boy suit and brothel creepers fronting a band made up of ex-members of The Meteors, Turkey Bones & The Wild Dogs and Showaddywaddy and stick to doing old rockabilly hits. His creative days seem a long time gone.
Posted by Steve at 19:55