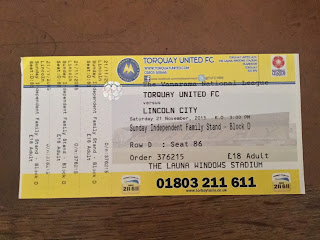 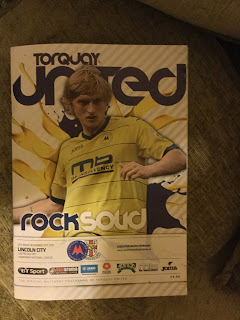 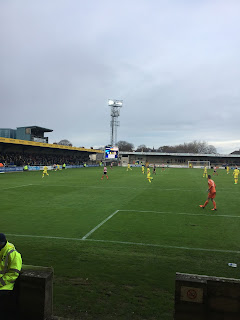 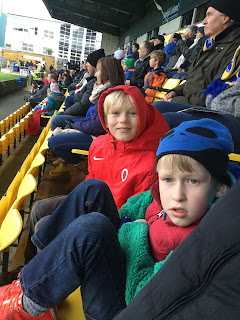 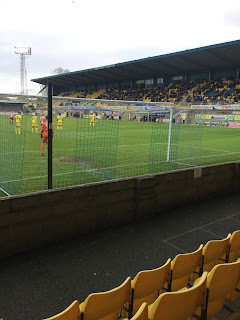 After last seasons debacle of trying to watch Torquay United take on Lincoln City at Plainmoor, 2 attempts before third time lucky and then Lincoln City losing out to an obvious "off-side" goal, I did promise to never enter through the gates of Plainmoor again. Unless (of course) Lincoln City failed promotion and they meet in the 2015/16 season or Torquay United draw Nottigham Forest in the FA Cup. All this can be read about in "Notes From The Popside #6". (http://muhmur.blogspot.co.uk/2015/04/notes-from-popside-6.html)

Saturday November 21 was a gloriously sunny day on the English Riviera, and it hadn't rained since Thursday- there was no postponing this game due to a waterlogged pitch. Gloriously sunny and freezing cold. Torquay United have changed managers since I was last here, and a lot of the playing / coaching staff have left as well. Torquay United are a club in financial crisis and perhaps this is why it cost me £18 to get through the gates. Luckily children under 11 got in free.
It was good to see Lincoln City in their regular red & white stripe kit, taking me back to the days when I used to watch them "on the Bank" in the 1970's. I was never LTE, but I was there. They played some good football, they seemed to have a "game plan" which is more than could be said for Torquay United. Lincoln City seemed to play it on the floor, keep the ball moving whereas Torquay were quite happy to "Hoof n' Head" the ball. Unfortunately the Torquay keeper had a nightmare of a game. Dan Lavercombe. Nervous and slow, and whoever told Shepherd Murombedzi he could play football must've been drunk. He had the touch of the Sterling's about him. Ran with the ball, a few step overs to slow the pace and then either forget the ball, or forget what he was supposed to do with it. Terrible to see at this level.
Lincoln City were worthy winners. 3-1, with a brace from Luke Waterfall and a great shot from (my) Man Of The Match Liam Hearn. One thousand one hundred folk watched this, with one hundred and seventeen making the journey from Lincoln. Next time this game happens, I'm in the "away end".

I enjoyed myself so much I might go to Plainmoor again this season.