My Life As A Revolting Cock 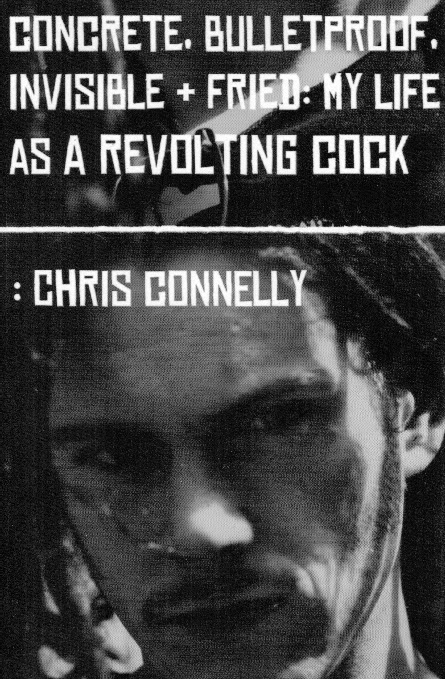 Desperate for a book to read during my post-op convalescence I opted for the Chris Connelly autobiography "Concrete, Bulletproof, Invisible and Fried:My Life as A Revolting Cock. I am not too au fait with the work of The Revolting Cocks, but I do like a good music (auto)biog and I know Chris had some history with Scottish post-punksters Fini Tribe, so I bought it.
About 25 years ago I walked into a record shop in York and heard the opening to the song "Beers, Steers & Queers"…I bought the 12" there on the spot. In reality a novelty record, but not that bad and the B-Side had a cover version of "Public Image", along with a track called "Stainless Steel Providers". I learnt there and then that they were a side project and off shoot of heavy metallers Ministry which should have been enough to put me off, but I just loved the song. I have bought no other Revolting Cocks records since and have off loaded the 12" years ago. I have a vague memory of seeing The Revolting Cocks live at International 2 in Manchester. Early 1990's. I am certain I saw Minister Of Noise support (I still have his debut LP on Peaceville), but I could be wrong. A friend told me recently that I saw Psychic TV at International 2 around the same time but I don't remember that either … Wire, African Head Charge and First Offence…yes…but the others - no. (The memory is going).

The book begins with the chance meeting of Chris and Al Jourgensen in a South London pub and heading to Southern Studios to do some impromptu vocals over a track Al was working on and then being invited over to Chicago to work on tracks by Ministry and The Revolting Cocks - two of Al's projects. This is all in chapter one. No back history of childhood life or time in Fini Tribe, just from day one his time as a Revolting Cock.
A few chapters in and I realise I am reading the story of half a dozen or so highly unlikeable and irritating characters where nothing happens - just masses of drug taking and having sex. Having wives, children,long term partners etc does not matter, it's all about sex with teenage fans and drug dealing "hookers". Chris has a love / hate relationship with Al and the rest of the musicians he is working with but never the less carries on taking crack, liquid LSD, Amphetamines by any means necessary, travelling around the US cheating on the relationship with his partner with any young girl who comes onto the tour bus. Repellent fellow. By the time I reached the end of chapter 9 - that's 9 out of 15 with an epilogue I realised I wasn't enjoying the book at all, it was all rather puerile, a story of someone who would take anything from anyone just because he can (or could), not a real talented guy.
Perhaps he repents by chapter 15, I doubt it and I don't care. A very boring book. One to leave on the shelf I'm afraid.