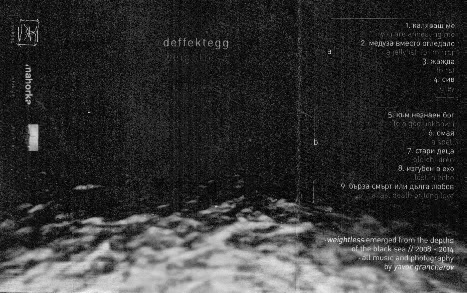 I have just spent a pleasant while listening to the debut release from Bulgarian project Deffektegg. I have no idea what the name means / signifies as no translation is available via my Google Translate! Deffektegg seems to be the project of sound artist and photographer Yasov Grancharov and "Weightless" is a conceptual piece brought from the influences of The Black Sea.
It is a tape of two halves. Side A is constructed of 4 short pieces, floating drones and undulating waves of sounds - the voices of a hundred sirens and drowned souls, lost transmissions from sinking ships are all there reminding me of early Maeror Tri recordings. Highly listenable construction that in parts is orchestral and other parts disturbing. Side B is a different barrel of fish with a ferocious beginning, a growling voice manipulation bouncing around the space, it has a poor recording quality and a live feel. Was side A the calm before the storm? The first two pieces don't quite seem to fit … by track 3 (all the pieces have Bulgarian titles which are lost on me) we have headed back into calmer waters. The final piece has a piano drifting and shifting along with a sliding drone - quite violent in parts, and then the tape runs out like the piece has been severed in its' prime. (Or sunk). Side A is excellent but I am struggling to pick up on side B. There are moments of this tape where "Shipwrecks" by Andreas Brandal was brought into mind.
"Weightless" is a C60 cassette and a co-release by two Bulgarian labels. Amek (operated by Angel Simitchiev from MyTrip) and Abandonment (operated by Nikolay Mitev from Nihilistic Front).

http://amek.bigcartel.com/product/deffektegg-weightless-2014
Posted by Steve at 15:11