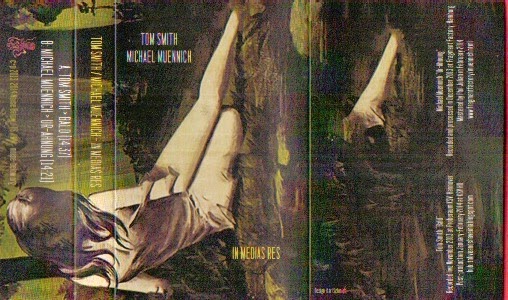 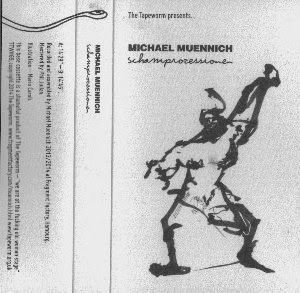 This year has seen a couple of great releases from Michael Muennich. Last year there was the excellent "Abbitte" on Banned Productions, and now a split release on the Greek label Noise-Below and an addition to the UK Tapeworm arsenal.
The split is with Tom Smith and called "In Medias Res".. A C30. If a C10 or C15 is a cassingle then the C30 must be a CassEP. I am not too familiar with the work of Tom Smith, I have a tape release he did with Aaron Dilloway "Allien Zu Zweit" that Fragment Factory put out last year but I wasn't too enamoured with his sound. I then found out that he was in the garage rock band Pussy Galore and the noise for noise sake ensemble To Live And Shave In Los Angeles. Tom brings "Bald", some sort of bedroom beatnik poetry with the hook "Death Exhibitionist" … could be "Deft Exhibitionist", I'm uncertain. It is delivered in a David Bowie voice, that's David Bowie during the Labyrinth era.
Michael Muennich presents "Ur-Ahnung" (An idea). The whole piece has the feel of an old record by Gilbert & Lewis (Dome etc) with chopping synth sounds and an orchestra of machinery - fax machines, printers and the like - springs firing. It brought to mind one of Michael's earlier releases "Zum Geleit" from 2011.
The cassette is limited to 100 copies and available through the label at noise-below.org.
The Tapeworm is a UK / London based label with attachments to Touch Records. Last years Colin Potter tape was in my Top 10 of 2013. Michael Muennich release is (again) a C30. The CassEP. "Schamprozessionen" is two untitled pieces, two processions of shame. A: Is straight out of the frying pan and into the fire as sounds pop, squeal, scream and sizzle. Random sounds .. shortly afterwards a dense swarming drone starts the approach and the whole sound gets very visual and pretty similar to the work of Dave Philips. Towards the end there are guttural / internal body fluid sounds that scrape across the room and bring it all into Schimpfluch territory. Excellent stuff. B: Is mainly the sound of stretching wood - a concret piece of contact microphone manipulation. Ripping paper, running water, shaving steel … a well constructed piece.
The release is limited to 150 copies and available in the UK through The Touch Shop for only £4.20 (but beware their P+P prices)! I am sure Rumpsti-Pumpsti in Berlin will have a few.
Michael can be contacted at www.fragmentfactory.com.
Posted by Steve at 20:39