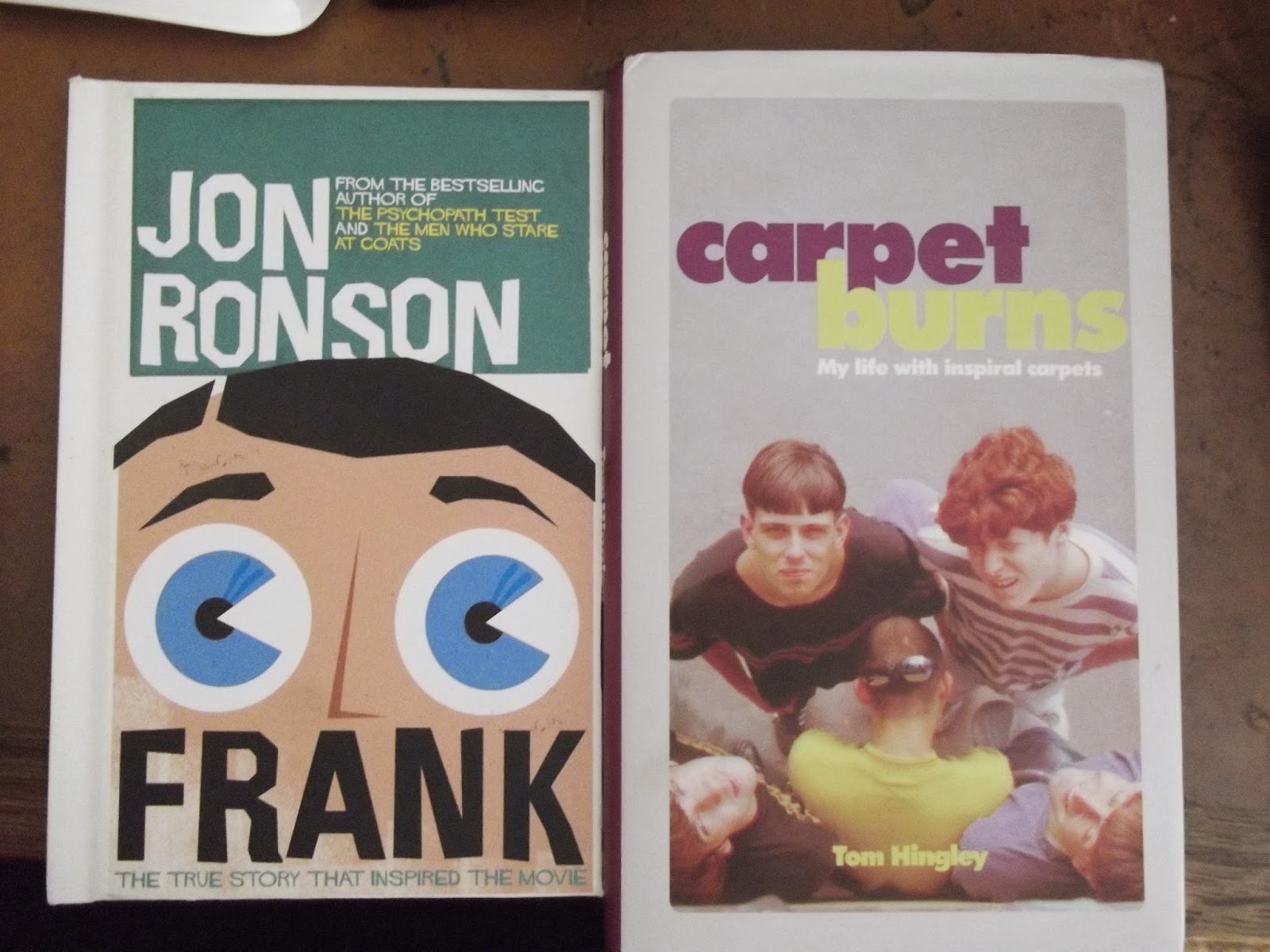 I have just read two books within a week. Two books in six days. A miracle, this must be a first in fifty one years. I am a notoriously slow reader. I feel pleased.
Two "musical" autobiographies featuring members of the Frank Sidebottom Oh Blimey Big Band and The Inspiral Carpets. I am not a "fan" of either nor do I own any music by them but I do like reading "musical" auto/biographies. Owt from Led Zeppelin, Simple Minds, David Cassidy, Throbbing Gristle or Bauhaus .. I'll read it.
Last April I was in London and I saw (on the Northern Line) posters for a film called "Frank" with Frank Sidebottom's masked face looming large. I was dumb struck, there was a film about the great Frank Sidebottom? This became a "must see" straight away. The next day I was at Paddington Train Station ( a place where they should have the Gang Of Four song "Outside the trains don't run on time" playing through the PA System on a loop), and in W.H.Smiths I saw a copy of the book "Frank" by Jon Ronson. Jon Ronson is one of my favourite journalists / author types. I used to love his late night conversational TV programme on Channel 4 and his books; "Them" and "The Man Who Stared At The Bush Of Goats" - great reads. Double gobsmacked when I find out that Jon used to be Frank's keyboard player in the Oh Blimey Big Band. I was tempted to buy the book there and then but found the volume slim and slender in size and at £7.99 big in price.
Last weekend I found a secondhand copy for  pound.
Back home I researched them film "Frank" and felt disappointed at what I was finding out. Frank was being played by Michael Fassbender (no relation) and with a deep American accent, not a Chorley twang. Frank was playing some festival in USA and this is the story of Frank "hitting the big time". Words of disbelief and disgust were left on a variety of forum boards! As I said to the wife "I wouldn't even watch that if it came on TV". And then I found the book for a pound.
Jon had been asked by Frank (or his creator Chris Sievey) to write an article about Frank's "comeback" in The Guardian. Jon writes fine articles for The Guardian…or at least he used to, I must admit I don't buy The Saturday Guardian anymore, I haven't for nigh on eight years … The article / essay is the main bulk of the book and is highly entertaining. A great insight into the world of Frank and life in late 1980's Manchester - always nice when the Hulme Crescents get a mention. Stories about life on the road, DIY rehearsals and Frank turning the Oh Blimey Big Band into some super-funk group and losing his audience. It is a sad story and one that inspired the film "Frank" to be made. The book mentions Frank Sidebottom as one of life's marginal characters, he likens Frank to The Shaggs and Daniel Johnstone. Outsiders - and that is what the film "Frank" is about. Not the life and adventures of Frank Sidebottom but using Frank to tell the story of marginals in society.
I read this book in one sitting and it took me just over an hour.

I know nothing (or I should say I Knew Nothing) about Inspiral Carpets when I picked up the book "Carpet Burns" by Tom Hingley. Well, I knew they were from Oldham and they had a song called "This Is How It Feels" in the charts in the early 1990's and I was told by a friend about ten years ago  that their keyboard player Clint was a cleaner in a Manchester nightclub. Probably the same nightclub where a former Bedlamite was a bouncer, but I can't confirm that.
I was keen to read about the rise of Inspiral Carpets and their role in the Madchester "scene". Although I lived in Manchester 1985-1990 the whole Stone Roses, Happy Mondays, Inspiral Carpets, CandyFlip thing just passed me by. I remember (not much, but I remember) being in a video for James that was shot on the grass outside Charles Barry Crescent in Hulme - but they weren't really Madchester were they?
The book is written by the lead singer Tom Hingley. The first couple of chapters cover Tom's childhood in Oxfordshire, being on of seven children and having a fondness of singing - doing all the stuff like miming to TOTP with a tennis racket and forming teenage bands. Albert Park & His Playmates. For me the book got really fascinating when in 1983 Tom moves to Manchester and lives in the Hulme Crescents. Robert Adam Crescent. I lived in the next Crescent 1983-1985. Tom was in the band Too Much Texas. Like a lightening bolt - there's a name from my dim and distant past. Too Much Texas flyers on Hulme walkways and lampposts. They were a student band, all guitar and melodies. 1984 and most of Hulme Crescent life were in bands. Home of Karl Burns, Cath Carroll, Edward Barton, A Guy Called Gerald, Inca Babies, the guitarist from The Passage, Metal Monkey Machine, Swivel Hips .. and of course the mighty Dr. Zarkhov's Waiting Room (ahh well never mind). Tom and his group used to drink at the White Horse, the "student" bar in Hulme .. I would frequent The Spread Eagle - and later The Spinners and Red Admiral .. so chances are that we never met, but if he had "parties" on Robert Adam Crescent then chances are that I was there poncing drinks and spliffs!
Tom was a glass catcher and bottle fetcher at the Hacienda around this time too - nice recollections of how great the place used to be before the drugs and shite music moved in. The best way to describe it? Empty. Empty and (therefore) exclusive. Nice to know that the live performance by The Residents blew his mind too. And then Tom auditions for and gets the gig as lead singer of Inspiral Carpets.
It is around this part of the book that it becomes disinteresting, it took me a few chapters to realise but I was reading nothing - stories that were basically non-stories. How they forgot guitars to foreign gigs or spent time in Dutch brothels or wrecked tour busses .. memories of reading Hugh Cornwell's memoirs "A Multitude Of Sins" came into my head. Childish pranks by band and crew members - including Noel Gallagher. Lads with too much alcohol and drugs in the system and surrounded by "yes" men. So, when the story of their downfall becomes apparent and they are well and truly shafted by Mute Records and their manager I begin to chipper up. The Carpets took it for granted instead of feeling privileged.
The story does pick up when Mark E Smith becomes involved with a guest vocal appearance on the "I Want You" single, and the tale of time at the TOTPs studio in London. But all in all, it is quite a dull read - even Tom's tour diary is so bland I think it has been edited to unoffend and what is the point of that? "Graham went off and did something I can't write about here" why not? It's your fucking diary - who else is going to read it - or "Binsey wrote _____/_____ is the biggest wanker in Manchester on the dressing room wall". Who? If you're putting blanks in your diary for fucks sake……
Anyway. A book about the Inspiral Carpets is interesting until they start to feature in it.
Tom is now in a band called The Lovers and Clint is a DJ (not a cleaner) in a Manchester nightclub.
Posted by Steve at 14:45