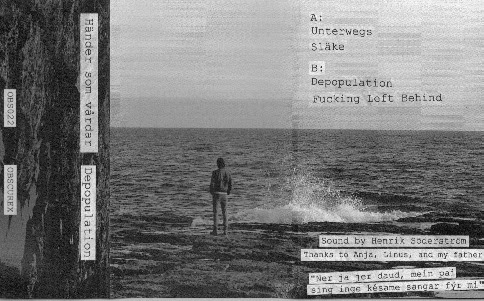 For the past few months I have been enjoying the sounds of Swedish project Händer Som Värder via various Swedish compilations such as "Sverige" LP, "Venice Of The North" cassette and recently the "Slutstationen" cassette on Styggelse. I got quite excited when I found the cassette "Depopulation" available through (the excellent) Swedish distributors Torden Ljud.
Händer Som Värder is the solo project of Henrik Söderström. Henrik also operates the label Unik Eld. "Depopulation" is a slight disappointment in a way that it is so poorly recorded it is unlistenable. It is one of those cassettes that makes me check if my cassette player is working OK. I run a couple of pro-dubbed and clean sounding tapes before getting the Q Tips out … Last year I bought a cassette by Slow Listener. "The Long Rain" released by Exotic Pylon. I met Robin Dickinson (aka The Slow Listener) at the Extreme Rituals event in Bristol and we got chatting so I was quite keen to hear his sound, but the cassette is unlistenable - Lo-Fi In Extremis. "Depopulation" reminds me of "The Long Rain". It is like listening to a slow trek through ear sludge and slime .. sounds / noises are just an undefinable bog. The title piece has such a "tape hum" it makes me think that it was recorded on a Carousel Portable tape machine that hasn't had a head clean since 1973. In the case of Slow Listener I thought I had a "bad copy" but I was told by Robin that his sound was meant to be really bad and sound like it was recorded on a Carousel Portable tape player etc etc. Is this the case with "Depopulation"?
"Depopulation" is on the Finnsh noise label Obscurex.
Posted by Steve at 12:46