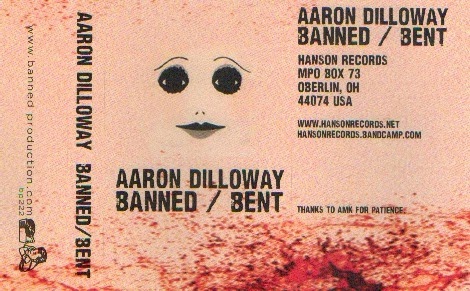 Meeting Aaron Dilloway and seeing his live performance at the ICA (London) in late 2009 was (for me) a turning point in how I approach, construct and present 'sound". His sound (to me) seemed to open doors of possibilities - still does - and then discovering Hanson Records a whole new catalogue of performers / artists was there … ready … I know, late to the party (as ever) but at least I'm here!
Since 2009 I have been trying to snap up any Dilloway release I can get my hands and ears on, the latest being the C40 cassette "Banned/Bent" on Banned Productions.
Late last year and I am sitting in the living space of Michael Muennich. Hamburg. We are chatting about the state of things when Michael says he has a new release coming out on "Bent". I smile, nod etc and ask where Bent are from. "U.S.A." … "You must have heard of Bent?" All I could think of was Pork Dukes. Weren't they on Bent Records? "They have released Haters and A:M:K". My mind was still a blank. "Bent Productions" says Michael incredulously "B-A-N-N-E-D .. Bent" Finally it sunk in .. "Ahhh Banned Productions, I've got an MB LP on Banned…yeah - fine label". So when I find out that Aaron Dilloway has released a cassette on Banned called "Banned/Bent" I wondered if he had had the same problem? Michael did organise a Dilloway show in Hamburg a year or so ago.

"Banned/Bent" does not disappoint. Two slices of classic Dilloway. "Banned" with a slow build of clicks, taps and slides and subtle introductions of layers of analog synthesisers, slowed voice samples and a didgeridoo which shift into a nervous swirl of insectual electronica and flutes. Well, that's what it all sounds like to me. A piece with no beats but plenty of rhythm. "Bent" is more of a journey / travelogue with the first ten minutes or so sounding like a walk from the sheet metal factory to the leafy suburbs with the sound of smashing metal (looped), light aircraft, bird song, traffic noise … reminiscent of Vile Plumage and their "The Plan Be Vile" mini album. Sub-conciously the sound shifts to electro-hum and that of a life support system before (slow) fading to raw bones and bare beef. Beautiful!
Keep the play button pressed down as there is a bonus track of jazz record loops …

Five years on and I have yet to hear a "poor" Dilloway release, or poor Hanson Records release to that matter. www.bannedproduction.com Necessary.
Posted by Steve at 15:27