The Days Of Idwal Fisher 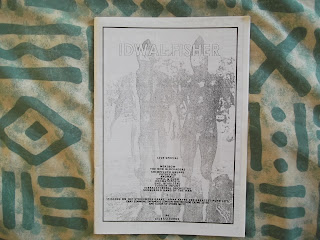 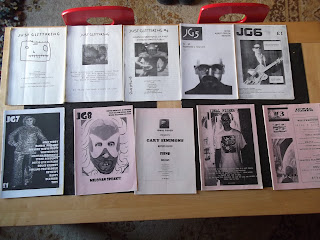 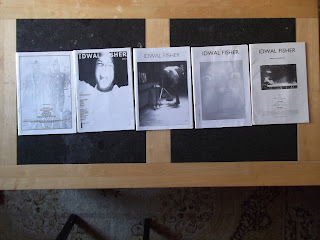 I was having a conversation the other day about The 012, brought on by my mention of the Fuck Off     Records "Tapezine", and the guy with whom I was having the converse with said that he included their LP "Let's Get Professional" in his Top 100 punk albums list in "Idwal Fisher #4". He didn't say #4 as he couldn't remember which issue it was in, anyway ... it reminded me that stashed under the table in the gimp room amongst a pile of Dieter Muh cassettes and back issues of The Wire & Record Collector is the complete collection of "Idwal Fisher" magazine and its forerunner "Just Glittering".
So I slipped on some Etant Donnes and settled down to read Idwal Fisher #4. It is a great read, it is ... funny. Irreverent and very very funny. #4 is the "Live Special" with gig reports of Emil Beaulieau's 2003 visit to the UK, VibraCathedral Orchestra in Leeds and Smell & Quim + Putrefier in at "Scruffy Murphys" in Birmingham.
"We make it to Birmingham and a one way system devised by a blind retard gives us much cause for mirth and merriment. We find 'Scruffy Murphys'  but Steve decides we should try the pub next door for a laugh, the place is full of white trash, must have been giro day today. A real 'Phoenix Nights' feel to the place. A DJ (in the loosest sense of the term) with tattoos and a stained string vest spins Abba and Olivia Newton John at a volume Merzbow would be proud of".
Classic Idwal - the Steve is Steve Underwood by the way...not me, but I know exactly what Mark means when he says that Steve decides they should try the pub next door for a laugh. Steve's top 100 list is the highlight of #4. Sham 69 "That's Life" is the greatest concept LP ever made, 48 Chairs are as good as The Normal Hawaiians and is that Current 93 on the cover of the English Subtitles LP? It actually made me dig out my copy - ha ha ha. (Which is sadly not included by the way)..
There are pages and pages of reviews. Tapes, vinyl, CD's and other magazines - #4; and I was still writing a page or two of reviews. It is in #4 that I mention "A Call To Crime In A Cold Hard Time" a double tape release by Krimkal Productions. Here I write negatively about a project called Arsedestroyer. "Rule number one, never name yourself after a Whitehouse track. Why? Because the listener will just either eject the cassette, fast forward or go to the toilet. I did the latter. I did the former and the latter and then I did the washing up". It's one of my favourite reviews. I also wrote bad things about a project called Kemikaze Electronics and nearly 10 years later I meet the guy in Stockholm. He was very drunk and aggressive and remembered the review word for word. Luckily he fell in to a drunken coma later on in the evening and had to be carried out in to the streets.
#4 also contains a write up on alcoholic beverages, has a "name the ugly mug quiz" - it's a photo of Steve Fricker and the regular "Charity Shop News" where Mark (Mr. Idwal) chats he about his latest scores from West Yorkshires finest charity shops ...
The magazine took me two sides of an Etant Donnes LP and I laughed and tittered throughout.

Idwal Fisher is / was the brainwave of Mark Wharton. A4 sized and on average about 40 pages of humorous bilge. It began life as "Just Glittering" and ran for eight issues and was available for trade (food, stamps or cash). Idwal Fisher #1 was "Gary Simmons reviews eleven Fiend releases" - a bizarre issue. Writers for Idwal Fisher included Jase Williams, Steve Underwood, Dave Uden, myself and Simon Morris. As much as i like to read Idwal Fisher blog I do think that Idwal Fisher & Just Glittering magazines need to be reprinted in book form - like what has been done with "Sniffin' Glue" and "Ablaze". Idwal was more "fun" when it was on paper - there was more graphics and throwaway comment. The Psychic TV Reunion 2023 photo on the front of "Just Glittering #3" with the selling tags - "More Shite To While Away The Minutes" and "Free To A Good Home" I hold up as exhibit A m'lud.
The magazines are entertainment and education rolled in to one - I never knew there was a 48 Chairs LP!
Is there a publisher out there who'll take the task on?