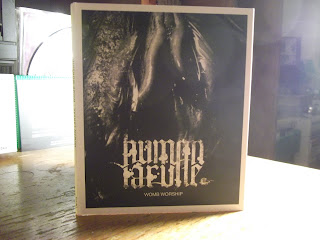 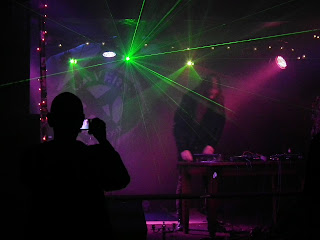 Have just spent a pleasant while listening to the latest album release by Berlin based project Human Larvae. "Womb Worship" has just been released on CD format by L.White Records. I have a feeling that the album is a "bit of a" classic of its genre....what e'er that may be? Power Electronics, Dark Ambient Noise, Black Metal? It's like hearing a classic by Brighter Death Now or Genocide Organ. Not in sound but in ... hang on a minute here this is bloody good!
"Womb Worship" is a concept album. Eight songs that bleed in to each other over 43 and a bit minutes. It needs to be played loud - it has been mastered that way by James Plotkin. (There's a name from the 90's). It beggars the question; Does your worst nightmare need a soundtrack?
"Perdition From The Virgins Mouth" opens the album with a dramatic one chord piano loop and the onset of thunder clouds. Ominous. The track has a great full sound, three hundred and sixty degrees of sound, a room is full of interference before the vocals start. Shouting guttural vocals through echo device, this kind of vocal is not a favourite...found a lot in Black Metal circles and Harsh Noise. Here (on this album) the vocal treatment blends with the music so it's not all consuming or over powering. I get the "gist" but can't tell what the bloody hell is being communicated. A breath loop leads in to "The Truth I Failed To See" a superb contrast of spiralling uncertainty and spoken word. "Slave To Violence" is blistering sonics with scraped metal and rattling chains. I was fortunate to witness Human Larvae's UK live debut in Exeter earlier this year and saw how Human Larvae create this great sound of bowing an iron rod over the rim of a metal box, through contact mic's, ambient mic's and effects pedals to create an ungodly sound. Beautiful. (I have the iron rod here with me. I keep it next to my CD collection like a rock geek who salivates over owning Jimmy Page's plectrum). "Entwined In The Umbilical Noose" has a great bass vibration building some kind of perimeter before a sonic battle begins ending in a multi-layered cacophonous symphony and stripping down to an assuring and calming four note bass line...."Methods Of Possession" is more vocals with junk metal and more of an introduction to "Wrapped In The Warm Sheets Of Mother Love" and its spinning wheel of blistering noise and spoken word (tape / sample). The story of matricide? This track plays like old school industrial. To an old TG / SPK head like me it is simply brilliant.
"Obsession Intermezzo 2" is the calm before the storm with synthetic strings and wet flesh. The album ends with the title track "Womb Worship". A wall of noise with split stereo vocal treatment, clanking metal and sonic depth charges. The album ends abruptly and all of a sudden...no fade, no come down - like suddenly awakening. Classic.

If you like Power Electronics, cleverly constructed sonic walls of layered madness (think Grunt, Burial Hex and Soldnergeist here) then you need to hear this album. Packaged in an 6 inch CD wallet and great black and white photography  - the cover being a close up of a clitoris (no credit), I am saying essential. Available in Europe via L.White www.lwhite-records.de and Tesco Distro and in the UK via Peripheral Records.