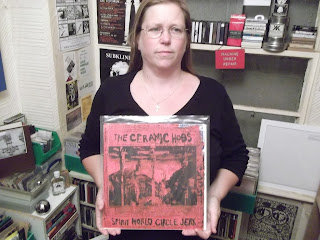 Have just spent a pleasant weekend listening to The Ceramic Hobs latest LP "Spirit World Circle Jerk" on Must Die Records. A strong contender for album of the year, but there's four months to go ...
A long time since a Hobs album release and this one carries on from where the 7" "33 Trapped Chilean Miners" left us. "Shergar" was polished - "Spirit World" is raw and how I like my Hobs.
It is the side long "Voodoo Party" that really gets me excited. A magickal mystery tour. It has cheesy muzak beginnings with tales of close encounters of the fourth kind and ends with reports of elementary school shootings in Connecticut and for fifteen or so minutes in-between is the work of sheer brilliance.
The construction of the album reminds me of Smell & Quim's "Spaceshit" with the segueing tapes cut ups and lounge lizard cocktail jazz moments ... "Voodoo Party" (as mentioned) starts with a radio phone-in from a woman who claims to have passed through a stargate and whilst this is happening there's a telephone conversation just out of earshot - memories of 'phone conversations with the mighty John Everall (although I know it's not). Rumblings as the machines awake to the beating of drums and beginning of a live improvised psyche-out "Hobs" style. (Copyright Hulme Crescent squat bands, 1986). Just as it starts it collapses and Jase Williams of Mothers Of The Third Reich blurts on the saxophone. "No, You're Going The Wrong Way" Live psychedelic rock-out with the kind of noise and quality that sucks you in to its vortex. The brain thinks of multi-coloured light show, strobes, smoke machines pumping out vanilla and strawberry clouds ... chant "Voodoo Party ... Voodoo Party" - turn the speakers to eleven and it gets very intense. Mushroom flashback. The voice of Elvis, there's a hurricane a-coming, Sandy Hook shootings...who's that telling me to smile and the world'll smile with me? Millicent Martin, Alma Cogan, Susan Boyle ...
Side A is made up of six tracks. I won't lie, I have been following the writings of ceramic head Simon Morris for a few years now. His words of wisdom and glorious insight and machinations of the world politic that appear on various Internet forum boards have kept me "tuned in". The tracks on Side A contain pearls of wisdom and word-play that take you in to Simon's world. "Say No, To" ... Child Witches .. The Devil .. "The Hong Kong Goolagong" is anthemic - I've been chanting it for the past few days ... who is John Jacob Jingleheimer Schmidt? "His name is my name too". Sections of "Voodoo Party" are revisited in title track, with acoustic twelve string and harmonies to rival Crosby, Stills & Nash .. or The Albion Dance Band. The side ends with "T.A. Death".  where Simon growls over a rough and raw 12 Bar Blues riff and tells us "I'll have your guts for garters".
It's one of those LP's where you play Side A and have to play Side B straight away and then Side B again. Give yourself a good hour and a few tins to listen to this.
The LP is limited to 250 copies and is packaged in an unique Dr. Steg silk screen print. Yeah, each LP is unique, not only in sound but in artwork too...Must Die Records have given The Ceramic Hobs a release they deserve.
Go to www.mustdierecords.co.uk and see if there's any left - you need to hear this LP, and (just to let you know) MDR are putting out an Astral Social Club 7" in a couple of weeks!

Picture.
1: Tamsin modelling the latest LP by The Ceramic Hobs!
Posted by Steve at 21:48