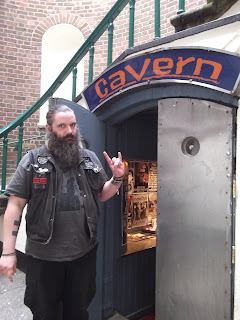 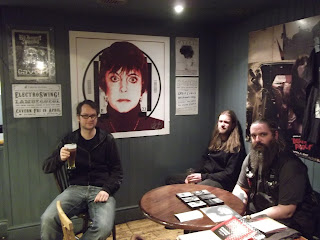 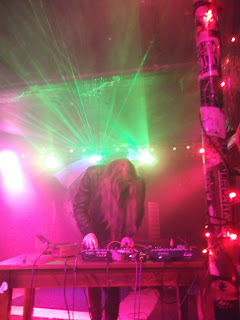 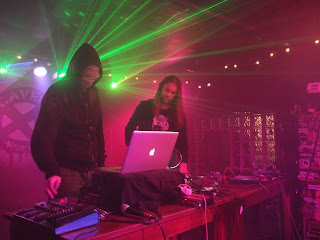 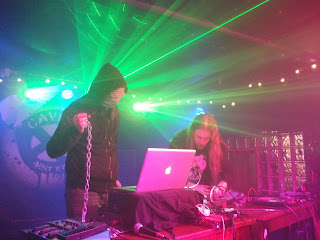 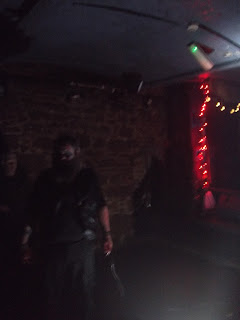 Sometimes you have to put on Harvey Goldsmith's jacket. Anemone Tube were in the UK performing a rare live concert in Birmingham, no other gigs ... and Trepaneringsritualen were in the country at the same time playing London and Birmingham only. A live date had to be organised for the South-West, this was too good an opportunity to let slip, fortunately Dave Goodchild of Exeter venue, the Cavern agreed and a night was organised. Assisting Stefan Hanser with his Anemone Tube live sound was Daniel Burfoot of Human Larvae, Daniel agreed to make his live UK debut in Exeter. Good man!
In the past 5 years I have organised a few shows in Exeter, a couple at The Cavern, the turn out has been usually small but last night a fair few interested souls made it to the venue, and for that .. I thank them.
Human Larvae kicked off the evening with a great slice of power electronics. Heavy looping mixed with crushed metal sounds and growling vocals. Daniel plays a metal box mic'ed up, in that box are stones and chains and Daniel rattles them about and at times bows the tin with a metal rod, it creates a wonderful sound, and through the Cavern's mighty rig it really made the body shake. (Word up here to the Cavern sound engineer, Mick. Good man). Daniel carried on his metal box antics throughout the Anemone Tube set. Concentrated drones, powerful loops and layering of electronica. Stefan ( a hooded figure with his face wrapped in cloth) manipulated a metal chain, dragging it across a mic'ed up metal plate then dropped metal shard on the plate - again the sound was bombastic. Explosion after explosion all in time to the pulsing drone and the bowed box...superb, and high energy stuff. There were vocals putting the performance into a personal realm, hairs stood up on the back of my knees.
Trepaneringsritualen finished the evening with a set on the sticky dance floor with just a floor light for atmosphere. The audience seemed to be glued to the wall as Trepaneringsritualen offered up 20 or so minutes of powerful noise, Thomas prowling his area, his domain spitting out slogans, litanies and rhetoric through a multitude of vocal effects. I think I heard the new 7" "Judas Goat" but I may be wrong. A Trepaneringsritualen performance is compelling .. a few more on the dance floor would have probably made it more imposing...but I ain't complaining.
A special night in Exeter. Harvey Goldsmith's jacket has now been put back in the wardrobe ...