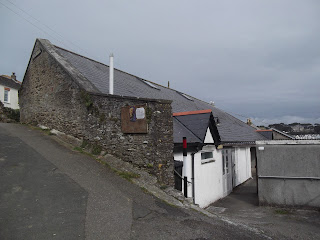 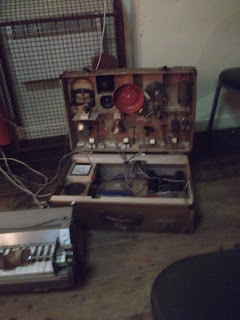 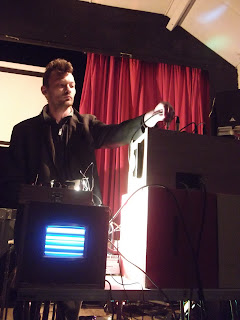 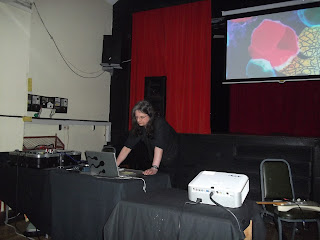 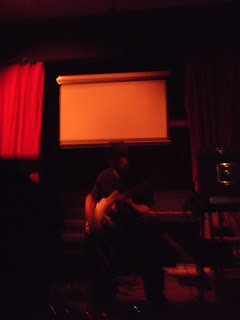 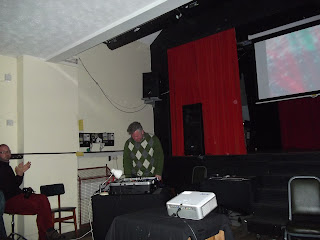 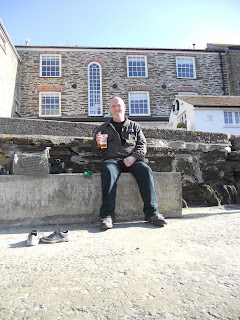 It was the surreality that appealed.
In my time here down in the South West I have seen some pretty strange things in villages halls. Magic lantern shows, finger puppetry, wooden skittles knockout contests and appreciation to the work of Rainer Werner Fassbinder, but last night at the Polruan Village Hall took the surreality to a new level. Nigel Ayers and Nicholas Bullen live as part of the Open Provocation Festival.
Open Provocation was a four day festival situated in the harbour village of Polruan. A small ville across the estuary from Fowey, in between Polperro and St. Austell if you want to look it up on a map. It is scenic heaven. 2013 saw the second Open Provocation Festival organised By artist / composer and local resident Robert Curgenwen. The three days previous saw performances from Robert, Lee Patterson, Matt Davis, Company Fuck, Alexander Wendt and Iris Garreifs amongst others but the final night was the big draw for me.

On arriving, Cornish artist Dom Allen had set up his installation of self made automata. Instruments that played themselves. Fascinating to watch as bells chimed, wheels ran over keys, random patterns were beat out on a drum and a guitar pick up hovered over magnets. I took my three children along and they loved it. Dom himself then performed a half hour set or so of improvised electronica using home made instruments and effects. Toy keyboards and remote control devices. It all sounded very 1960's Soviet if that makes sense? Academic Intellectual DaDaism. Nigel Ayers performed under his own name but the sound was very much Nocturnal Emissions. Whilst a film of coloured drops overplayed on the projection screen Nigel stood by his laptop and performed an act of random-signal-gesture. Lost in the trance like sounds Nigel moved his limbs slowly to the vibrations and pulses. I too closed my eyes and relaxed....missing out on the visuals, but quite happy with my own. Fifteen or so minutes and the sound cut dead and Nigel returned to bring us a wall of noise, sonics that I haven't heard since the hey day of Industrial music, or at lest the first few Nocturnal Emissions albums. The set ended with a loud and hypnotic version of "Never Give Up".
At this point the Village Hall ran out of "average" strength bottled lager and all that was left was the 6 & 9% bottles of Chimay. The evening was going to get more interesting ...
Surrounded by a crescent of effects pedals German guitarist Jorg Maria Zeger sat and created a layered sea of drone music. It was at this point that with a head swimming with Chimay lager (I won't tell you which % I chose) I went to stand outside the hall and watch the lights of the boats and water taxi's scuttle between Polruan and Fowey. The deep drones escaping through the walls and rattling the widows and woodwork of the hall made a great soundtrack. This all made the surreality so much more underlined.
Final artist of the evening was Nicholas Bullen. I know the name through his work in Scorn, but have never heard the solo sound of Nicholas Bullen. Dressed like he was just about to start a round of golf Nicholas performed to film. Highly coloured almost blurred footage of old 1970's super 8 holiday films, landscapes, traffic, random pedestrians all mixed and mashed making it look like a bad trip sequence from an old psychedelic movie from the 1970's. The sort that Beryl Reid or Nick Henson would be in (maybe Dudley Sutton) and the sound, the rising and falling sound, the crescendos and drops into almost silence. Fast edited like a Spiral Insana. Nicholas kept his sound sources secret, hidden in a flight case ... clever stuff .. both Nurse With Wound and Lull were brought to mind. I overheard Nicholas mention a new LP out soon, his first in almost twenty years, it will be well worth a listen.
And there the surreality ended and the short walk back to the B&B. (Hormond House on Fore Street...100% recommended, with a comfy bed and cooked veggie breakfast).

To promote and fund the festival and hopefully make enough money and create enough interest so there is a third Open Provocation Festival Robert released a double CDR featuring exclusive material from all acts at this years event. They cost £10 and are available from www.recordfields.net/festival If there is a third year I shall be there.