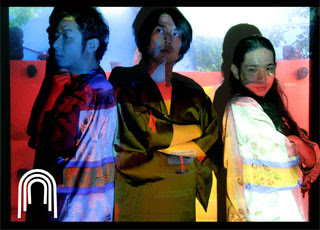 Have just spent a pleasant while listening to the latest album from Japanese outfit Kufuki - seriously, it has not been out of the CD player for the last three days. It is infectious.
It came to me via Sir Idwal of Fisher, who frequently mails me stuff to run past my ears, and I am eternally grateful because I don't think I would have ventured out and bought this one blind...despite the involvement of Astral Social Club.
The album is entitled "Kufuki" and is on the Japanese (naturally) label Wonderyou. The sound is pure Japanese psychedelic-prog-pop-rock. There is no noise, no wild experimentalisations, just pure Japanese style psychedelic-prog-pop-rock. I think (I don't speak or understand Japanese so I can only think) the album tells of an adventure - the songs feature many voices (characters) and there are spoken word pieces in between tracks (the voices are more Richard Burton "War Of The Worlds" than Jordi Valls and "Psychopathia Sexualis") which keep the story flowing.
The sound varies too, beginning with the most "noncommercial" piece; "Dai-Haku-Ryoku". This is all fast spliced rhythms and cut up instrumentation before the album kicks off with "Traveller In Asia". The sound reminds me of Flaming Lips along with Circle and the Hyperdelic Psychedelic period of Psychic TV. There is the sound associated with Japanese TV commercials in there, as well as a great guitar riff that lasts over three tracks evoking Link Wray or even Hank Marvin.
I think the closest album I have to this at Hartop Towers is Smell & Quim's "Spaceshit" album from 2000. And that is canny because the album finishes with a bonus piece - a remix of "Dai-Haky-Ryoku" by Astral Social Club. And it is a bonus track too, it has no place on the album really...it sounds slightly out of place, that's not to say it is a bad track just slightly unnecessary on the CD.

I remember hearing the Smell & Quim CDr "Spaceshit" for the first time. I was stopping over at Daniel Lowenbruck's flat in Berlin and he put the album on...and it simply blew my socks off. I HAVE TO HAVE THIS ALBUM! At first I found it hard to believe that it was Smell & Quim. I had almost kind of given up on them (for a while) after years of Tit Wanking and Stinky Horse Fucking I was giving the Quim sound a sabbatical and then they come out with "Spaceshit". Classic! Here was a non-noise album constructed of clever rhythms, loops, hooks and voice samples to die for. It is an album that requires a Hawaiian shirt for listening.
Anyway - back to Kufuki. Recommended. The CD comes in a gatefold poster, a colourful design with dragons and insignia..and Idwal - if you get any more Kufuki through your letterbox, please send it my way!