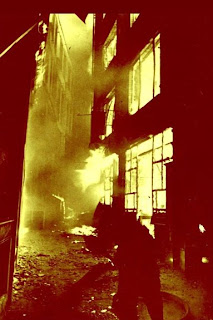 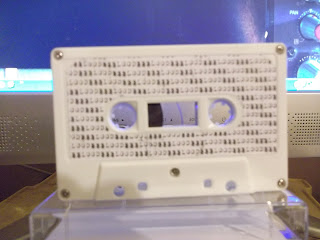 Have just spent a pleasant while listening to the latest BBBlood release, a split cassette release with Tinnitustimulus. As with most BBBlood releases information is at a minimum, but I can tell you that this is a C30 tape on the "not on label" label. What is it with folk not wanting to put stuff out on a label...with a catalogue number! BBBlood has his own label, Trans-Dimensional Sushi. I know next to nothing (good song) about Tinnitustimulus but a look on the Discogs site shows that he has released a lot of stuff on Deaf Culture Music. Couldn't the two labels have combined, even if this was just a one-off project? Would it have been that difficult? Then us cataloguers and anal retentives would be happier.
Side A starts with BBBlood and "Crippled". A piece of phazed sonic electronics that (I think) fits in with the HNW movement. It sounded like Cheapmachines to me...which is not a bad thing. The second track is called "Reduced Sentence". A more experimental and acoustic side to the BBBlood sound. Intricate sounds and clever looping and delay effects of metal scraping, doors slamming, objects thrown and general shifting move around the speakers constructing in to a final build and ultimate confusion. Good stuff, the way some of the sounds are looped and repeated to build and fade is listening pleasure. Hopefully the impending BBBlood vinyl LP will be an extension of "Reduced Sentence".
Like I mentioned earlier, I know next to nothing (good song) about Tinnitustimulus. There is a MySpace page, but I can't be arsed with that site anymore. Can anyone? I used to have a page up there, but I went to it one day and found that I was advertising a fucking Tinchy Stryder album as well as the latest Dieter Muh news...I was off there straight away! Anyway. Back to Tinnitustimulus. A guy called Tom from New York State. Here he provides three tracks. "Winter Night Barefoot" opens with radio dial static. Dead air space through a multitude of effects. "Ahnighito" follows. A long piece named after the largest iron meteorite to fall to Earth ... Greenland to be precise. This is a classic slice of mid 1980's power electronica - it is in to you like a train. A noise that at times reaches celestial levels...voices of angels can be heard through the madness. I shall play "Ahnighito" once in a while just to remind myself why I like listening to noise. Put "Reduced Sentence" and "Ahnighito" on a 7" piece of vinyl (and a bloody label) and you've got a classic single of the noise genre.
Tinnitustimulus ends with the brief "High Tension Lines". High frequency synth noodles and amp-noise, not a cover of The Fall classic.

So great release from both projects concerned. It is limited to only 100 copies, professionally duplicated and necessary. I got my copy for £4 from www.bbblood.blogspot.com