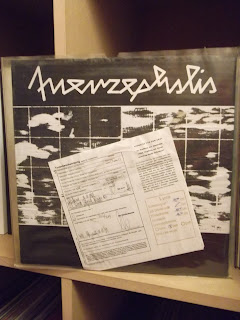 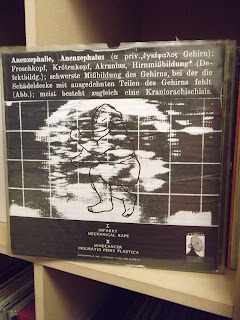 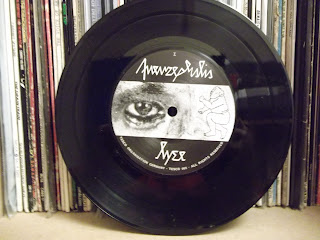 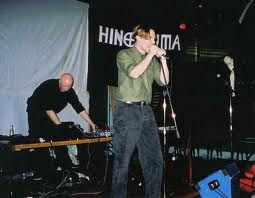 I have been on a little bit of a Tesco tip today, preparing for the arrival of the latest Genocide Organ LP - the "Live In Tokyo 2007" LP, OK I already have the DVD and CD but I am a bit of a GO nut!
A Tesco Org release that I hadn't heard in a long time was the 1991 Anenzephalia 7"EP "Lyse". Catalogue number Tesco 003. I remember buying it in Leeds many years ago - probably 20 years ago (great song). I was living in the very small Yorkshire village of Thorganby at the time (in between Selby & York) and the Red Rhino Records shop in York had closed, then someone recommended a trip to Leeds to look at Bad Records.
Finally I made it to Leeds and the Bad Records shop...not far from Leeds train station. It was a little basement beneath a clothes shop, a clothes shop designed for Goths, Punks and leather fetishists. Bad Records was full of stuff I wanted to buy, stuff I had seen at Red Rhino, stuff that I had read about in "Music From The Empty Quarter" magazine and stuff that just looked down right bloody interesting. Problem was that I had arrived when Bad Records was closing down. Bad news! On the "up-side" they were having a "closing down sale" so I managed to pick up some great stuff at a very cheap price. Some Smell & Quim, Intrinsic Action, Merzbow, Con-Dom, Illusion Of Safety and "Lyse" by Anenzephalia.
I had never heard of Anenzephalia before. The idea that there was an industrial label called Tesco Org intrigued. Welcome to the Tesco Disco. The guy behind the counter pointed the record out by saying something along the lines of - if you like Con-Dom you'll love this - god bless him! I think it cost £3, and he said that it had a razor blade attached to the sleeve that if you pulled out the vinyl you would cut yourself so they removed it before a customer cut themselves and filed suit!
I play the EP at 45 RPM, except for the first track "Infarkt" which (obviously) sounds better at 33 RPM. At a slower speed it becomes more atmospheric, the sequencer pattern works better - more depth. "Mechanical Rape" is pure power electronics with its' distorted Bennettesque vocals over an electronic pulsing drone. In 1992 this could have been my first exposure to the genre?
Side 2 has more clarity in sound, less distortion effect. "Mindcancer" has a rhythm that wouldn't be amiss on Soviet France's "Mohonomische" album. It's the 1980's analog equipment - I hear the Korg MS sound. "Induratio Penis Plastica" has a sequencer rhythm pattern going through flange and phase effects similar to early Club Moral except here the vocals are distorted, moving in and out with various other electric signals.
Anenzephalia is the project of B. Moloch. Also on this EP are Fri Von B. Und D. (Undoubtedly Klaus and another member of Genocide Organ). B. Moloch is now a member of Genocide Organ and since then Anenzephalia releases have become less experimental than this 7". Perhaps B. Moloch (or Michael to his friends)! has found his sound?
I still listen to and buy Anenzephalia stuff - I like it, I like it a lot but non have pleasured me more than the "Lyse" 7"EP.

As a member of Dieter Muh I have supported Anenzephalia a couple of times in the UK and played with Genocide Organ in Germany. It has been an honour and a privilege to get to meet and know Anenzephalia.

If you see a copy of "Lyse" floating about - BUY!