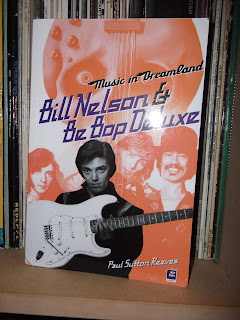 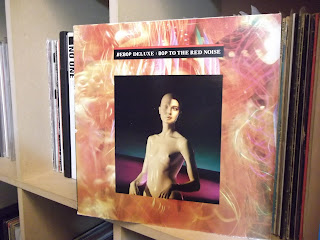 I have just finished reading the excellent Bill Nelson biography "Music In Dreamland" by Paul Sutton Reeves, published by Helter Skelter books. As far as (music) biographies go this one is unputdownable. A page turner. Mainly due to the subject but also in part to the fine penmanship and research of Paul Sutton Reeves. No stone unturned, no collaborator left unmentioned type of research. Fascinating from page one onwards.
Bill Nelson, the musician's musician. I first became aware of Bill Nelson through his work in Be Bop Deluxe. My (elder) sister used to like Be Bop Deluxe (I think she even went to see them in 1977/78 in Liecester)....she had a couple of albums, they were a little bit too complicated for me, like, at the time, Uriah Heep, Grateful Dead or Caravan but I knew they were good. I preferred the short, sharp, snappy tunes like "Maid In Heaven", "Fair Exchange" and "Ships in the Night". I saw Be Bop Deluxe on ITV's "So It Goes" back in August 1976 - I know it was August because this book tells me so, also on the programme were The Animals, Allan Stivell and Soft Machine but I remember nothing of them just Bill Nelson looking like the Australian actor James Laurenson (anyone remember "Boney"?) and me wanting a pair of blue suede brothel creepers to look like a member of Be Bop Deluxe. (I was 15)! I got the shoes.
The onset of punk saw alot of art/prog bands fall by the road-side injured (No Dice, Lone Star, Widowmaker) and a lot of prog rock dinosaurs simply lay down and die...but Bill was cool, it was still OK to like Bill because he liked the up and coming groups too, and he cut his cloth accordingly.

The book begins in Wakefield (Yorkshire) 1948 and the birth of William and his developing love for guitar music at the turn of the 1960's. Hank Marvin, Duane Eddy etc. Then his rise through 60's beat combo's like The Teenagers, The Midnight Creepers and The Untouchables through the working men's clubs of the North with Global Village, and becoming part of a Pentecostal Church band called Gentle Revolution. Excellent reading with recollections and soundbites from all those involved in this period. Research is par none. Gentle Revolution break into the "prog rock" scene and slowly become Be Bop Deluxe.
The story of Be Bop Deluxe is one of great misunderstanding between artist and label. Rather like fellow EMI sufferers Wire, Be Bop Deluxe were always one album ahead, so touring to promote the latest LP didn't really work, and EMI (well, the subsidiary Harvest records...which I always thought was the "prog" arm of EMI set up to promote Barclay James Harvest...but I could be wrong) wanting to sell Be Bop Deluxe as some Glam-Pop group. Their biggest "hit" "Ships In the Night" does sound rather like 10cc to me. Attention to detail is (again) spot on here with times and dates of releases, TV appearances and supports. It was great to see Burlesque get a mention!

The story becomes more relevant to me when Bill disassembles Be Bop Deluxe and forms Red Noise. I bought the Be Bop Deluxe LP "Live In The Air Age" in 1977, and decided to keep it when 99% of my record collection was purged. Out went Judas Priest, Uriah Heep, Deep Purple, Frank Zappa, Greenslade, Colosseum 2 etc..and I started year zero with The Damned and Be Bop Deluxe! In February 1979 Bill Nelson's Red Noise released "Sound On Sound" - fast New Wave "rock" a la XTC, Talking Heads, Television, Wire etc. Excellent stuff...and image wise spot on. Red Noise all dressed in Chinese (Communist) jackets, like the Gang Of Four but with a burning red circle on the left breast pocket. Powerful stuff back in 1979. The same year I saw Com-Sat Angels at Lincoln Art College (supporting The Piranhas, X-S Energy & Collide) and they dressed exactly the same. Chicken and the egg? Poor album sales and the refusal of the American arm of EMI to distribute the album (too communist?) saw Bill being thrown out of the EMI doors and setting up his own label Cocteau Records.
On the 25th of May 1981 I went to see Bill Nelson & The Practical Dreamers live at Retford Porterhouse. I know it was the 25th of May, not because of the book but because I have a bootleg of the gig. Cracking gig...a full and rowdy audience and Bill on stage for over an hour. I had forgotten that Don Snow played keyboards. Don was the keyboard player on The Vibrators "Judy Says" single. He was also in The Sinceros who I may or may not have seen at Lincoln AJ's in 1978. It could have been The Dodgems or Comic Romance...long story but the support was definitely Whizz Kids! Support at the Porterhouse was The Yorkshire Actors performing "Das Kabinett", Bill Nelson released the soundtrack LP in the same year and that was the last Bill Nelson album I bought. A friend at the time became a huge Nelson fan and bought anything and everything so I just got everything given to me on TDK AD cassettes, but that stopped by request after 1983's "Chimera" Mini-LP.
By now Bill is truly a solo artist working out of his home studio in North Yorkshire, collaborating with a variety of artists. A surprise collaboration with author, radio personality and ex-Skrewdriver drummer Mark Radcliffe is mentioned. (I do fully recommend Mark's first book "That's Showbusiness" an excellent and funny read). In the 1980's the book concentrates on Bill's relationships with his wives and lovers as well as his practices with magick and interest in Rosicrucianism. The book speeds up somewhat, it remains in depth in its research and stories but just gets lighter in time passages. Bill's work is largely of instrumental sketches a la Durutti Column (I imagine) releasing album after album on his own Cocteau label.
In 1990 I went to see Bill Nelson live at York Arts Centre, he was performing a piece called "Altar Pieces" with his brother Ian on saxophone. Also on the bill was Harold Budd, and together they performed an improvised piece. It was a beautiful evening, highly sophisticated music. I managed to grab a chat with Bill and Ian (I was interested in the whereabouts of Ada Wilson and ex members of Fiat Lux, I managed to get a copy of the cassette "Altar Pieces" on the night, which I gave to a friend as a birthday present - I would love to have that cassette again...so if anyone reading this knows the whereabouts etc).
The book enters the 1990's with the awfully named project Channel Light Vessel and failed Be Bop Deluxe reunion attempts, and again Bill releasing album after album of instrumental sketches. I must admit to not hearing anything of Bills work after the "Altar Pieces" release. The book mentions Bill dabbling with Drum n' Bass. Oh dear.

The book ends with a great "Where Are they Now" chapter..a nice touch to a great book.
I watched Bill being interviewed on Cherry Red TV the other day, it tells the same story (naturally), so if you can't be bothered to read the book - watch the "film" instead. I am now on a hunt for some old Be Bop Deluxe vinyl and Bill Nelson/Red Noise singles. I found an old 80's compilation "Bop To The Red Noise" for £1 not so long back and I've just got hold of the 7" Box Set "Permanent Flame". I bought this years ago for 50 pence in York...now I have parted with a tenner.