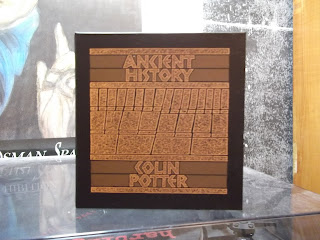 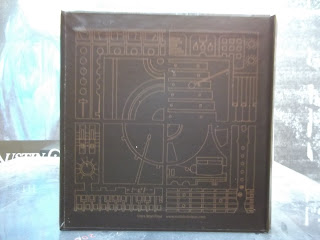 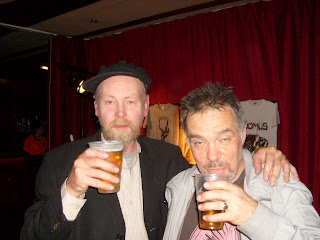 Just spent a pleasant while listening to the latest release of Colin Potter by Hong Kong based label Ultra Mail Productions. "Ancient History" is a 5xCD compilation box set limited to 200 copies. The box contains remasterings of old cassette releases from Colin's Integrated Circuit Records back catalogue, as well as a bonus CD ("Deja Vu") of odds and sods.
Six years ago the excellent Vinyl On Demand label put out a Colin Potter LP of old 1980's recordings called "A Skeleton/Cupboard Situation", it is an essential album...recommended, so I bought this release hoping for more of the same, although a high percentage of stuff contained here is top drawer a lot of it does hit the mediocre button and 5 CD's could have been brought down to two, but the package is superb, excellent liner notes and a signed postcard to boot makes this release essential as a document if not ear witness.

"A Gain" was originally released in 1982 and the tracks do wear its influences on its sleeve a bit. Colin has always been an electronic wizard, building synthesizers, using old synths, building loop machines and recording devices. Here the tracks sound like Tangerine Dream, Terry Riley and Ian Boddy, in parts they sound like really early Throbbing Gristle. 1975 and all that stuff. It all has a 1980's DIY feel to it, and in the case of "All Reel" a great 1970's proggy feel with fuzz tone guitar playing a medieval guitar riff - "harlequin rock"!
"Two Nights" was released a year earlier in 1981 and still has a Tangerine Dream feel to it. guitar improv. over sequencer/synth patterns. It brought to mind the work of Astral Social Club. The CD contains a bonus piece called "One Million Blades Of Grass". An excellent electronic wall of patterned sonics that builds and de-constructs. Amazing for a piece that is over 30 years old and still sounds fresh and relevant.
"Recent History Volume One" plays like a soundtrack to the unmade film. Large, desolate, visual synthesized vignettes. The titles sound like they belong on a soundtrack album too; "Nine Months", "Ships That Pass In the Night", "Marsh Fog" etc. Despite being recorded over a three year period the CD does play like a cognitive album with Tangerine Dream (again) being a reference point. "The Sorcerer" and "The Keep" being Colin's favourites?
"Recent History Volume Two" is compiled of more "sketches" from the 1980's and plays like a disjointed compilation. A lot of the stuff sounds like Lincoln's synth pop-meister Kev Kettle and his Cacophony '3.3' project. If you are familiar with (and like) "The Elephant Table" album and/or the "Rising From The Red Sand" series of tapes then this CD is essential.
And so the box set finishes with the bonus CD "Deja Vu" - tracks from the mid 1980's through to the mid 1990's. Whilst playing the CD ( a couple of times) I was reminded of Coil, especially the Coil Vs. Eskaton 12" "Nasa-Arab" with its' electro-techno-dancefloor-12" remix type beat. I remember buying "Nasa-Arab" when it was released and thinking "If King Crimson were alive today, this is the kind of record they would be releasing". I wrote it down in my diary! By the time I reached "Lost" (track #4) I was thinking of my old friend Dave Uden and his pre-Dieter Muh projects such as The Matrix and Eighth Circuit. Exploring the possibilities of new technology, but with rhythms and in a 12" remix stylee. Track six is "Drone for JC", a beautiful piece of music. Layered EBow guitars and didgeridoo. The stand out track of the CD. There is an awful track that is a collaboration with Colin's brother-in-law, Jon Cafferey - he used to run Breton Records and manage Einsturzende Neubauten, and then it moves into Psychic TV territory. PTV circa The Magickal Mystery D Tour era.
The release sounds dated which the "Skeleton/Cupboard Situation" LP didn't.

I would not go as far as to say I know Colin, but in the mid 1990's I got to know Colin and record at his Integrated Circuit Studio when it was based in Tollerton, North Yorkshire. At the very first Dieter Muh gig Colin introduced himself to me and complimented the sound - he was also the only paying customer on the night! Over the next two / three years I met up with Colin in York, and arranged to record the first "proper" Dieter Muh album at his studio with him producing. The result being the 1997 CD "Black Square". Alongside Tim Bayes & Dave Uden I interviewed Colin for ND magazine...our paths have crossed a few times since. Muh have supported Colin as a solo artist and as a member of Ora, and I have also spun discs at a Colin Potter gig! The last time our paths crossed was at the Current 93 / Nurse With Wound bash in Kentish Town, 2010 - either he was drunk or I was....I forget.
This package is good because the cassettes don't exist anymore, but if you want to experience Colin outside of Nurse With Wound or Ora...then go for the Vinyl On demand LP.