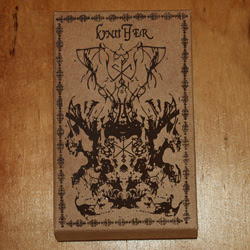 The start of the year and another great release from Kinit Her. OK, I know this cassette came out during the autumn of 2011...but it takes time to catch up in Devon!
"Mosaic Of the Hyacinths" is a limited (100 copies) cassette release on UK based Paradigms Recordings label. Packaged neatly in a "Brad Pack" sleeve. A kind of brown card envelope..the same Small Doses used for their Trepaneringsritualen cassette release.
Since "discovering" the sound of Kinit Her about three years ago their sound has drifted into the neo-folk arena, a drifting away for conventional instruments and sound into the experimentation with acoustic sound and "folk" (pagan/Wicca) music. Their interest into the occult deepens. Their CD/CDEP release last year (co-incidentally on Small Doses) "Gratitudes" paved the way for this cassette.
Side A begins with "His Traces In Us". An incantation/invocation that has drawn chanting vocals over lute, bellowed organ and percussion. "A Nightingale Crosses Our path" is an instrumental piece. Incredibly haunting and moribund. Bowed strings, acoustic 12-string guitar and rudimentary drums create a dark, nocturnal fanfare - cinematic sound...excellent stuff.
Side B has a very large presence of Dave Tibet about it - with a touch of Laibach. The Laibach is in the vocal presentation and militaristic snare patterns used, the Tibet (also) in vocal style and violins. The final track "Storm Of Radiance" is music for a dark ritual with its' drawn out vocals and staccato strings building up to a swirling dervish cacophony. A whorle of sound which ends up looped and crescendoing before decay. Excellent piece.

US neo-folk in its' ascendancy.

If unfamiliar with Kinit Her this is a good tape to start at. It is available for £5.99 post paid (worldwide) from paradigms direct - www.paradigms-recordings.com. Surprisingly there are still copies available. Also a note to the folk at Strange Rules, who mailed two cheap tapes recently for £11 - this tape came with stickers, fliers and a little tract explaining the motive and releases of the label. Just a little hint there.....Value For Money!
Posted by Steve at 15:29