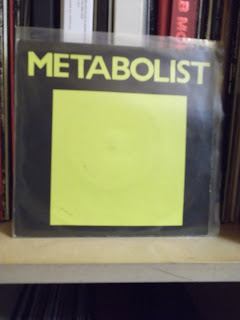 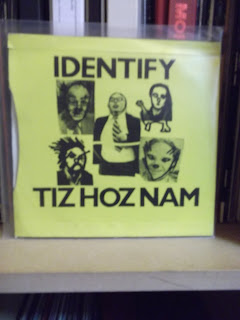 One of my all time favourite groups from the past 30 + years are Metabolist. I was playing the recent Storm Bugs re-issue LP "A Safe Substitute" on Harbinger Sound and it put me in mind of Metabolist.
In the past ten years I have managed to pick up the Metabolist 1980 LP "Hansten Klork" and the 7" classic "Identify" both quite cheaply. I am still on the look out for the rest! "Identify" is a classic post-punk period single, independent, catchy, left field and has a great picture sleeve. All of Metabolist's vinyl sleeves look like Rothko paintings.
"Identify" was released in 1980 on their own Dromm Records label. Catalogued DRO-3. "Identify" starts off with bass guitar and drums, sparse/angular - very live...agitated vocals join the mix blurting the chorus "I can't, I can't, I can't identify - I can't identify". Catchy. The verse has a "pub vocal" type lyric. (If you know what I mean)?? Then it all goes off at a tangent. It has a middle eight that sounds all improv. and Recommended Records. All Plain Characters, Transmitters and The Homosexuals before it catches up with itself for one last chant at the chorus. A beauty. I first heard it in 1980 and the delight has never worn away. the B-Side is an instrumental called "Tiz Hoz Nam"...it must mean something? This track is dark, sinister and weird. Imposing guitar notes plucked over a rumbling synth. Think very very early Throbbing Gristle or a 1960's soundtrack to a Hungarian puppet show and you'll be close.
If listing top twenty singles from 1980 then "Identify" would be in there.

At the time I never knew much about Metabolist, In fact I knew nothing! I thought they were Welsh but don't ask me why. I had no idea Metabolist was a style of architecture. They weren't featured much in the NME or Sounds. They did (however) fit in with what I was listening to at the time. Experimental, post-punk, industrial, electronic music like all the comparisons I have made above...and throw in This Heat, Scritti Politti and The Lemon Kittens and we have my 1980 in a nutshell. The joy of the Internet has brought some information. Metabolist band member Mark Rowlett was a member of Camera 3 and went on to be in Shock Headed Peters. I never knew that! I could never "get into" The Shock Headed Peters at the time...they were too rock orientated for me - I am prepared to give them a new ear. And then Malcolm Lane made an LP called Max & Malcolm in 1982 that I have just bought! It just looks like I'll like it.

Anyway. Metabolist (hopefully) will probably get some re-issue treatment soon, their sound deserves it. If you see any Metabolist for sale - buy it!
Posted by Steve at 20:14