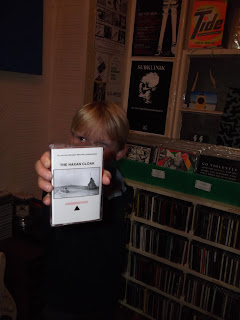 In the past seven days (great band, classic 7" "Raindance" on the 4AD label) I have been reminded that as a record and cassette buyer I am bit of an outsider...or at best a relic. A fellow sufferer (that's what I call folk who work at Torbay Hospital) asked me "where do you buy records from"? A strange question. I had to ask what kind of record he was after and he said that he wanted a copy of Deep Purple's "Machine Head" album, but it had to be on vinyl as his Dad was getting back into records again. Records are (apparently) "so retro". It just seemed strange that someone would not know where to buy records from - I told him about Torre Records, Torquays' only secondhand vinyl emporium.
A couple of days earlier a fellow sufferer was telling me about Feeder and how they are releasing their new single on cassette format. Limited edition cassette! "How 80's" he exclaimed! Seems about right for the bastard sons of The Alarm who have played "Slade In Flame" too many times, but there y'go. It is good that a stadium rock troupe are putting stuff out on cassette, but I fear it has a novelty / gimmick value, as the Feeder fan said - he doesn't own a cassette player anymore but he's going to buy the cassette anyway. It just seemed strange that a "music fan" would not know that folk still release on cassettes - there are cassette labels...ah well.

I don't have a turntable set up at the hospital. It's straightforward CD's and cassettes. I would love to have a couple of decks set up, rock the Pathology Department as were but I don't think I'd get away with it. So, thank you to Aurora Borealis label for re-releasing the excellent Haxan Cloak "Observatory" single on cassette. This is the second cassette release by Aurora Borealis this year. 2011 started with the release of "A Night With Two Moons" by Burial Hex, and ends with "The Observatory" by The Haxan Cloak. It is a cracking single. Hypnotic looping electronics and rhythms playing and dancing through the ears. I have mentioned the single a couple of times before in earlier blogs so I won't bore...I just love the fact that the tracks are out on cassette, beautifully packaged with the Joseph Beuys sleeve. The cassette is limited to 50 copies and available by googling Aurora Borealis.