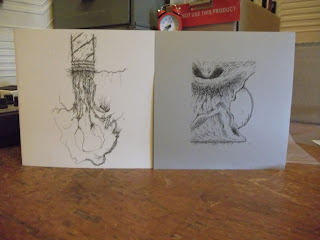 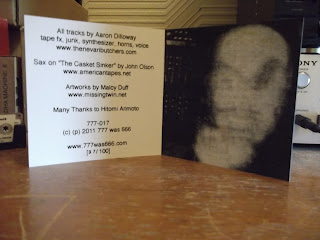 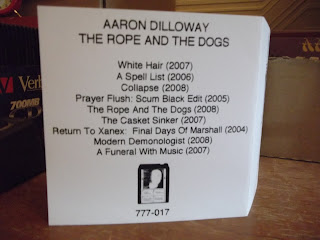 Have just spent a pleasant while listening to "The Rope And The Dogs" by Aaron Dilloway. Originally released as an 8-Track cassette in a limited edition of 8 copies back in 2008 and now re-released by Osaka (Japan) based label "777 Was 666" on CD format and in an edition of 100. 9 tracks and 40 or so minutes of prime Dilloway, the reason why I like to listen to and experience the sound of Aaron Dilloway are all here on this album. Fascinating and hypnotic.
"White Hair" is a great opener. The ideal curtain lifter. It has a submarine "blip" (depth charge) sound going through it - voyage to the bottom of the sea - there's treated voice and keyboard thrown into the mix. "A Spell List" is a master of tape loopery, synth noise and masked vocal. A very powerful piece. "Collapse" is a small two minute piece with delicately built loops, made with the care of surgeons. "Prayer Flush:Scum Black Edit" follows. This track sounds like work in progress, or maybe I'm not used to a track shifting on so many levels from Aaron Dilloway? The title track is another short work of tape manipulations and looping before "The Casket Sinker". This excellent 6 minute track is layer upon layer of electronic junk loops and crazy edited saxophone blurts. It takes me beyond pleasure.
"Return To Xanex: Final Days Of Marshall" (any clues to what this title is referring to?) is the albums magnum opus, lasting a whole twelve and a half minutes. It has a Bruce Gilbert feel to it with ampnoise and tape loops, it kind of self disassembles itself before going off on a tangent - I feel it is a conceptual piece but I have no idea what the concept is. "Modern Demonologist" has echoed loops acting in a question / response way. Experiments with a Roland Space Echo. The album finishes on the excellently titled "A Funeral With Music". Putrefier-esque synth destruction and noise. The album ends with a breakdown. Classic.

This is easily the finest Dilloway I have heard since......well since I last played some Aaron Dilloway - but not the "Door With No Handle" CDr on Chocolate Monk...I didn't like this album so much. As mentioned the CD is limited to 100 and available from Hitomi Arimoto via www.777was666.com
Posted by Steve at 13:58