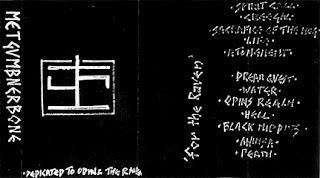 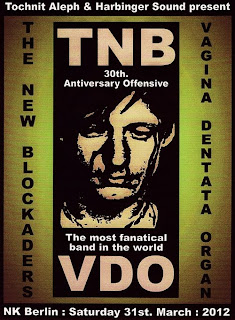 As those who know me know - I am no fan of the download. It is an alien concept to me. I don't have the equipment to support such a device. Well yes, I have a computer but it is not hooked up through a hi-fi system or the TV, just two little speakers on the monitor...that'll do. I don't watch films or TV channels on the computer either nor do I own an Mp3 Player or an i-pod, I am not keen on headphones or ear-phones either. Another alien concept is the wearing of ear-phones whilst walking, or travelling. I like to have the full scope of hearing. Three hundred and sixty degrees. "It is not only the deaf who cannot hear" to misquote Mark E. Smith.
I was never big on MySpace, I listened to a few tunes but I never downloaded. I uploaded but withdrew quite quickly, although I think my A:A:K page is still up there because I have forgotten the password I used and quite frankly can't be arsed....I have never been on soundcloud or bandcamp. I cannot see reason. I have friends (that may surprise you) that live off the downloads. They have no record collection or tape collection...nowt to play the things on either. Their collection is a list on a computer screen available at a click. Like I said at the start; alien concept.
So far (to my knowledge) there has been one Dieter Muh track available as a download only, a track on the compilation "Squeezing Being Issue 2", put out by Wholeness Recordings. Although where you go to download a copy I do not know. Probably MySpace.
I am not that keen on blog sites that put up old releases for downloading. There was one site (I forget the name) that had the complete catalogue of The Homosexuals and their related off shoots. These releases exist as actual artifacts, as pieces of work / art, OK in 2011 they are pretty hard to come by and probably cost a days wage...but that's not the point. Before I end up infuriating myself and going on a tirade of senseless reiteration - there was a VW advert on TV today whilst I was watching the football (FC Halifax Town did OK, I thought) that stated something along the lines of; Why have something that sounds like a Golf when you can have a Golf , and that is quite similar to my line of thought.

Saying that though, last week I was told of a blog site called "nostalgie-de-le-boue" that had uploaded Metgumbnerbone's "For The Raven" for download. "For The Raven" was Metgumbnerbone's 1984 follow up to the excellent "Ligelahorn" LP on A:Mission Records and was to be released in cassette format on Nekrophile Records, but the release never came about.
Swedish label Styggelse have some how obtained a copy and put it on the site. I put a call out to my good friend Tim and now have a copy on CDr, and a great listen it is too....mind you I would love to have the "bootleg" cassette.
Metgumbnerbone were the Rupenus brothers Richard and Phillip who later created The New Blockaders along with John Mylotte and Sean Breadin who also (with the Rupenus brothers) recorded under the name of Masstishaddu. Although recorded in 1984 "For The Raven" is still highly listenable, probably because I listen to a lot of stuff recorded in the early 1980's? It sounds a lot like Soviet France...the Soviet France of "Garista" and "Mohonomische". There is a lot of rhythm, drums and metal percussion mixing with flutes, gourds, and (probably) trumpets. Large industrial warehouse sounds of scraping and obsolete machinery mixed with wailing and screaming...and at times what sounds like Geordie "Speaking In Tongues". It would have been a perfect release on the Austrian Nekrophile Records label, it fits in ideally with Korpses Katatonik, LasHtaL, Zero Kama etc. It is very 1984. There were a slew of bands/artists around at this time producing "dark industrial", "ritual" and experimental noises. Hunting Lodge, Current 93, Zos-Kia, Coup De Grace, The Anti Group, Seven Horns Da Ho, Devation Social, The Brides Of Christ all spring to mind whilst writing this. I too took inspiration from these and other projects (as well as other sources) and created Muhviertel with Sean Rorke. "For The Raven" brings this all back.
I think it is a shame that Styggelese didn't contact Metgumbnerbone and offer to put it out on CD or cassette with original artwork etc instead of being a download...but I am glad they did, at least, make it available to my ears and alien (conceptual) brain.

On a similar train. I have decided to book a flight and hotel and go and witness what may be a "gig" of a lifetime. The New Blockaders and Vagina Dentata Organ (another one of 1984's great projects) in Berlin. March 2012. I am quite excited about this one.