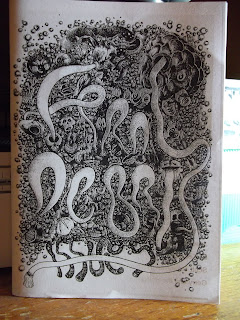 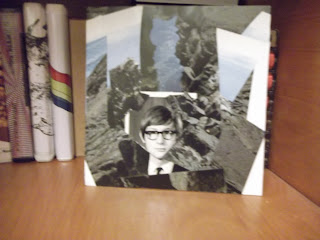 I used to like reading "Just Glittering" then it changed its' name to "Idwal Fisher" and I used to like reading "Idwal Fisher" and then it stopped. Well it stopped being an ink and paper publication and returned as a blog. www.idwalfisher.blogspot.com and it is still a damn good read it's just that you can't take it to the toilet with you to read...unless I printed it off (but the printer/scanner ain't working at the moment) or sat a laptop on my knee (but I don't own a laptop). "Idwal Fisher" (the magazine) used to give the lowdown on all things; reviews of fags that sat on the shelves of tobacconists in Moscow, 30 pence albums bought at the Bingley Mare & Foal Charity Shop, beers from around the Greek Islands sat amongst the pages of reviews of the latest Merzbow CD or Terry Riley reissue or Smell & Quim gig. It was (the magazine) classic reading. I used to smile when I came home from a hard days slog at Torbay Hospital and found an "Idwal" sitting on the mat..the BD19 postcode reassuring me that what lay inside the plain brown paper envelope was the evenings entertainment...slip into something comfortable. A Neil Campbell or maybe an early Nurse With Wound album and spend the next few hours wallowing in the world of Idwal. Then it would sit on a pile of back issues in the crapper until it needed drying on the bathroom radiator and be filed in a box in the gimp room.
I shall never forget sitting on Daniel Lowenbruck's toilet in old East Berlin feeling like a stunned heifer with a hangover of twenty men reading a copy of "Just Glittering" laughing and shitting and quickly feeling like taking on the day. A great hangover cure!
Since the demise of "Idwal Fisher" there has been very little to take its' place. Sure, there are "noise" / "experimental music" based magazines but they are pretty serious stuff. Nothing wrong with that...nothing at all...but nothing to follow Idwal in printed form. "Niche Homo" is pretty good, excellent Bruno Wizard interview in the last issue I saw and coming up to "essential" is the Nottingham based magazine "Feral Debris".
"Feral Debris #5" is out now! There are no reviews in "Feral Debris" just essays, insights and interviews. A big big selling point for me was an interview with Gerry & The Holograms..I thought this may be a rehash of an old Manchester Fanzine interview...but no...this interview with C.P.Lee by an unknown journo brings us up to date with all things Gerry and Absurd. Excellent. There is also an interview with Nate Young and John Olson talking about their new band Stare Case (awful name) and with Graham Lambkin of Kye Records and Shadow Ring. Also featured is an superbly written overview of filmmaker Jose Ramon Larraz and pieces on artists Steve Swarek and Scott Treleaven. There are no CD/LP/gig reviews. The feel of the mag reminds me of when I started reading "Headpress" at the turn of the 1990's. Remember "Headpress"? Is it still going? Will have to do some research.
I originally found out about "Feral Debris" a couple of years ago because one of their issues came with a CDr featuring Astral Social Club. All copies of "Feral Debris" come with a free compilation CDr. Issue 5 is no different. A downside to this is that the magazine neither features or mentions any of the bands/artists/projects on the CDr. I have to find out about these artists myself! And I hate going on MySpace! At least "Impulse" magazine used to write articles or interview the bands they featured on their giveaway cassettes. Issue #5 starts with Nacht Und Nebel and a track called "The Thousand Young". It all begins with looping and locked grooving before drifting off into some lo-fi drone and feedback and then drifting back into a locked loop. Usurper follow with a short attempt at musique-concret and a frequency that would make a dog laugh at fifty yards. Preslav School Of Industry follow. I am at this point uncertain whether or not this project is aligned with Preslav Literary School but I think coincidence would be too strong if not. The track is called "Fever Triangle" and is not very well constructed which did make me think that the world has two Preslav Schools. There's shortwave crackle, slowed down voice, amp hum, radio voices, meandering drone all put to no use. The next three groups / projects are all new to me. Brittle Foundries bring "Homecoming" to the CDr. It is a slow melancholic piece with sounds of escaping gas and piano notes. The whine of an engine brake floats across the speakers like an incoming tide, the track could have been called "Dancing With Robert Haigh". ABYSSES (Their capitals not mine) track is called "Violent Trust" - it is a moribund song (with lyrics) that made me write down (I make notes y'know) that this person/these people own Throbbing Gristle albums, but then again so do I, which is why I have fallen quite partial to this track. I have since found out that half of ABYSSES is Johnny Scarr of Mantile/Spoils & Relics. The track is far too long. Inner City end the CDr with "Space Forest". I thought it a bit of a coup if "Feral Debris" had got an exclusive track from the infamous 1980's Detroit techno crew. (I do remember dancing...yes dancing...to their Big Fun and Good Life tunes in various nightclubs and strip joints in Salford & Manchester in the late 1980's). But no.....this track is awful new age keyboardery that even Dave Greenslade would have been too embarrassed to release! Might be Belgian.
Anyway. "Feral Debris" is worth £3.50 inc P+P (or exchange equivilent anywhere in the world). Get in touch with them at: www.feraldebris.blogspot.com . The folk also run the Rammel Club in Nottingham so if you're in the East Midlands go along and support.

Apologies for the poor quality of picture...but like I said, the scanner isn't working so i had to take photographs.
Posted by Steve at 19:54