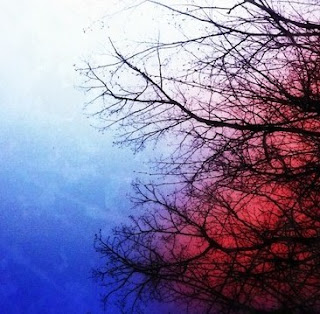 Have just spent a pleasant while listening to the latest release from Ekca Liena: "Slow Music For Rapid Eye Movement" a double CDr on Dead Pilot Records. It was after I had played the latest and excellent Plurals LP a few times I thought I'd see what else is out there by Plurals and/or their label (I assume it is their label) Dead Pilot Records and the name Ekca Liena kept appearing. A solo project from Plural member Daniel Mackenzie with a few releases to his name and one on the excellent Small Doses label. I had to explore.
"Slow Music For Rapid Eye Movement" is just that. A concept album. I was pretty uncertain as to what sound Ekca Liena produced as solo releases by another Plurals member; Duncan Harrison sound nothing like Plurals. The album starts with "Unfolding" acting like the introduction round before "Fire Emerging From Mist" comes in all acoustic guitar and drone. Wow, I was not expecting this! "Post Altitude" follows with reverse electric guitar that melds into acoustic...excellent stuff and crystal clear production. I am three tracks in thinking I have discovered a classic. "Reverse Erasing" has a choppy pulse with a Chinese thumb-piano rhythm and bowed strings, it is all beginning to sound rather Eno. "Post Altitude" has an Equatorial feel, as does the following track "Missing Weeks"...like a slow trek through the Amazonian Rain forests, now the sound has become "pleasant". Pleasant music. "Music For A Dream-Catcher" I thought, and then I was put in mind of Horizon 222.
Horizon 222 was an off-shoot from Soviet France (or Zoviet*France for late comers). Back in the early 1990's (1992/93) Andy Eardley of Soviet France put out a couple of LP's and an EP of New Age trip-hop psychedelia. It wasn't cutting edge experimental and raw like Soviet France, it was nice coffee table Guardian reader stuff. I still have the "Spirit Level" 2x12" but it hardly gets a listen.....
Anyway, "Missing Weeks" brought them to mind before it went off on a tangent with some keyboard sound that brought to mind CBeebies and "Waybaloo". Having very young children at Hartop Towers means I see alot of Kiddies TV and I can spot that dreamy keyboard sound anywhere! "We Are Dying Flames" is a cinematic piece of ethereal glistening, it brings to mind fast-frame editing and time span footage which is clever stuff seeing that the concept is "Slow Music For Rapid Eye Movement". Full marks. "Into The Wind" is pleasant with dulcimer tones and an electric guitar through chorus pedals. "Further Longer" is too long by far working on about five different levels - nice looped guitar effect a la Vini Reilly...but it does change too much and seems never-ending. The final piece "Missing Ending/Unfolding Revisited" has an end credit feel with its' "old 45" crackle and ghostly drone.
"Slow Music For Rapid Eye Movement" was originally released as a single CDr on Dead Pilot Records in 2008, this 2011 edition includes a CDr of covers and remixes. Very Fjernlys I thought. Nick Hudson provides a couple of covers of the same song: "Reverse Erasing", where he adds a placid lounge jazz organ and awful vocals to the choppy pulsating rhythm. Clem Leek & Kixotex make tracks sound like The Orb whereas Pupilar complete the 1990's feel with a bit of Meat Beat meets The Orb type remix. I was looking forward to the Duncan Harrison cover of "Into The Wind" but the track just went on for too long and Aidan Baker's remix of "Fire Emerging From Mist" with 1970's prog style guitar had me searching for the skip button. Shame.

The album has its' moments but they are too far between to grab full attention, and for some of us (very old) folk it does sound like stuff I have heard before.
Posted by Steve at 20:02