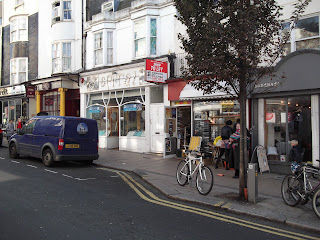 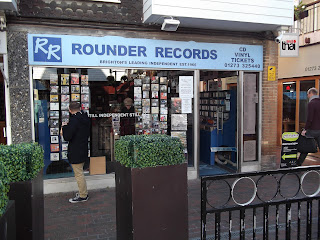 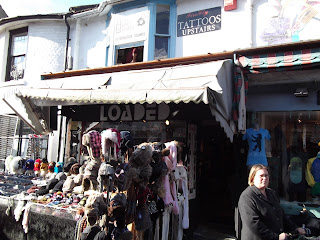 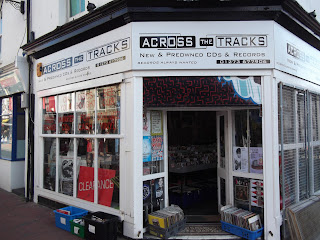 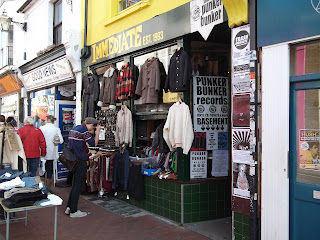 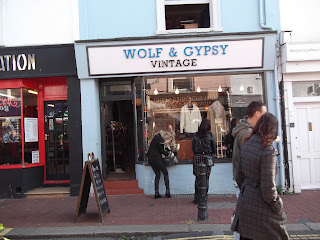 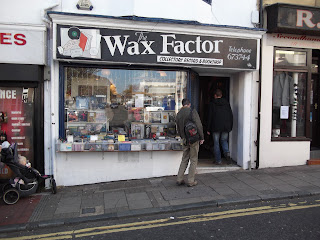 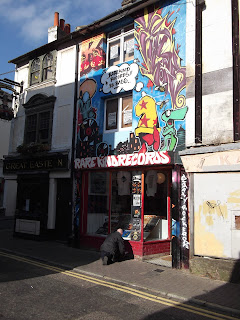 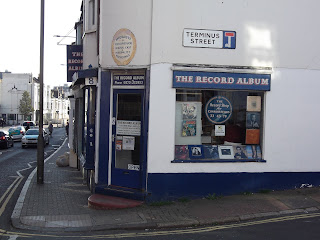 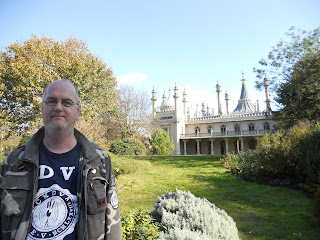 Just spent a few days in East Sussex and spent time to discover the secondhand record emporiums of Brighton. I managed to pick up a couple of choice slices o' vinyl so left happy, but for a first time visitor to the town...I think next time I'll make the next visit a day one.
There are lots of secondhand record shops in Brighton. A gamut. The area to be in is North Laine. It lies between the train station and the Brighton Dome. I was staying in an area known as Kemptown and a trip to North Laine led me down St Jame's Street where there is a small secondhand vinyl shop, a shop that has no name (it's opposite "Superdrug"). The guy had a small table outside full of the usual 70's and 80's bargain stuff - Supertramp, Billy Joel, Haircut 100, Barbara Dickson, that kind of stuff..not really tempting but the proprietor got chatty and so I went in and found a box of "punk" LP's and found a Patrik Fitzgerald 12"EP for a fiver - inside no records seemed to be priced. The shop is very small (compact and bijou), certainly no more than 2 people at the same time. The walk to North Laine took me through an area called The Lanes - all jewellery and antiques but in Brighton Square there is Rounder Records. Rounder Records is more Modern Rock biased (Emo, Coldplay, Muse...I suppose) but has a very small secondhand section. Their "Experimental" section was three Chris & Cosey LP's.
North Laine is Brighton's BoHo Quarter, secondhand clothes, designer clothes, secondhand books, graphic novel shops, mod clothes and be-bop millinery. Fortunately a few secondhand record shops too otherwise it would have been "avoid like the plague"!
Edge World Records on Kensington Gardens is not a secondhand record shop, it is a bloody good shop non the less. I had a chat with the owner - nice chap - he advised me on where to shop for vinyl in Brighton and sold me the latest Plurals LP. Edge World also stocks Astral Social Club and Aaron Dilloway. Full marks and worth a visit.
Take a right at the end of Kensington Gardens and on the corner of Gloucester Road and Sydney Street is Across The Tracks. Shit loads of stuff here to suit all tastes and about an hours worth of browsing. Similar to a Record & Tape Exchange. I didn't see any 7" singles, but I am sure they were there...I just didn't have the time at this point. (Never go secondhand record shopping at lunchtime with a hungry 5 year old). A couple more shops lie on Sydney Street. Punker Bunker who sell 1980's/90's and beyond leather, studs and acne type punk and Wolf & Gypsy. Downstairs Wolf & Gypsy is vintage clothing, upstairs the vinyl. Nice selection of electronica, experimental , new wave, dub and reggae..but a tad expensive. £10 for a non-mint copy of Slits "Earthbeat" 12"? Really?
At the end of Sydney Street is Trafalgar Street and the jewel that is Wax Factor. Two huge rooms dedicated to secondhand books, cd's and vinyl. All fairly priced it must be said. Like Across The Tracks time needs to be put aside to browse in this shop. I found a copy of Section 25's "The Beast" and a picture sleeve copy of The Secret's "The Young Ones" on Arista Records. I have been after both of these since 1983. The Secret 7" holds a special place as they were the first "punk" band I ever saw live, supporting XTC at Nottingham Polytechnic, I think it was December 1977. They had a live showstopper and crowd singalong song called "Handel A Vandal" and I loved it. Benny Leopard on vocals and a guy dressed as an alien called Shrink on guitar. Anyway..."Handel A Vandal" is on the B-Side and the 7" is one I shall be buried with. I could have easily spent a week's wages in Wax Factor. Rare Kind Records is on the corner of Trafalgar Street and York Place. Mainly dub and techno vinyl with a few 1970's/80's new wave rock. Worth a browse.
Finally, by the train station on Surrey Street there is The Record Album. The shop's speciality is classical and film & TV soundtracks but there's a couple of hundred "punk" LP's to look at. Chart punk mainly but like all the secondhand vinyl shops in Brighton it has a lot of Blitz albums. I was hoping to find a copy of local band The DP's "Television Romeo" 7" going for a couple of quid...but no!

I recommend a trip to the secondhand record shops of Brighton, it's just a shame they're in Brighton.