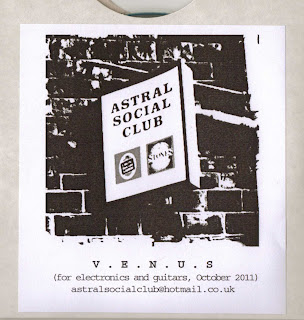 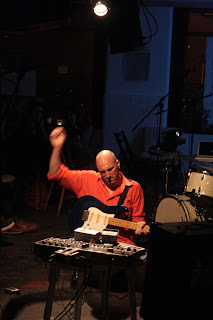 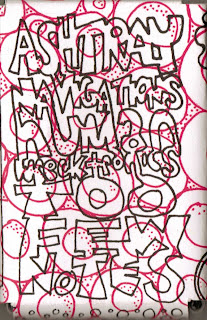 A package arrived last weekend from Chez Campbell with a couple of fine releases, and I have spent the last couple of days getting my ears accustomed to them.
"V.E.N.U.S." is a CDr single, the second this year from Astral Social Club. A couple of weeks ago Astral Social Club played at the "Galvanised Event" at Cafe OTO in London. The theme to the evening was "Music Vs Universe: Music Inspired By The 5 Chaldean Pre-Telescopic Planets". The preamble on the festival website sounded interesting, but the evening was too soon (for me) after the Astral Social Club live set in Cambridgeshire. Fortunately for those of us who could not make it to the event Astral Social Club (the label) have released the Astral Social Club (the project) "rehearsal" set, and pretty essential it is too.
The sound begins with a harmonious symphony of chaos, electronic tones, samples (that could be anything from Hot Chocolate to The Who) and sequencer patterns. Holding the sound together is an all droning distortoed echoey guitar....after a time this all drifts into a chugging motorik beat .... the wall of noise remains busy building itself in the background getting higher and higher until it all collapses to a sequential rhythm and a fading guitar. The piece ends (it is all one long track) with the sound of a church organ. Images of Burial Hex for me here. It is a beautiful track full of intrigues and energy and here's the good bit - it's only £4.00 in the UK. Available from Astral Social Club at: www.astralsocialclub.bigcartel.com
Also in the package came a summer 2011 release from Ashtray Navigations, the humorously titled "Human Wrecktronics". Released on a C40 cassette by US label Medusa Tapes.
I have recently reacquainted myself with the sound of Ashtray Navigations after giving them a slightly wide berth since I saw them live in 1998, but a live show last month kind of "blew me" a little (well, as much as a 48 year old man can be blown) so now I am after "stuff". Side one of the tape is the title track and features Phil Todd (head Ashtray) and Neil Campbell indulging themselves in a cosmic 70's fantasy. The piece has a "live studio" improvised feel to it (OK I'll say it..."jam") with the sound built around an undulation, a cosmic wave of spaced out guitar and synthesized keys that float around and out of the speakers. It's a good listen if a tad too long and very somnambulistic. For side two Phil is joined by Mel D and Phil Legers. I think it is Mel that runs the Leeds based label and promotion outfit "The Termite Club". I could be wrong - usually am. Anyway; "Too Few Notes" is a full-on 1970's Kosmiche jam with drone tone, tweaked synthesized oscillations and filigreed piano. It is a little too Gong-a-long and spacey for my taste, but it was an enjoyable listen. I'm still going to discover more Ashtray Navigations before the year is out! I am uncertain about the availability of the tape, but try googling Medusa Tapes and see what turns up.