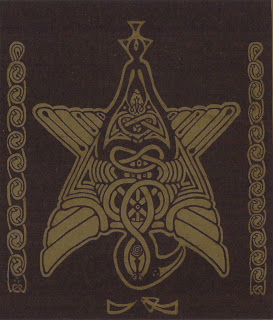 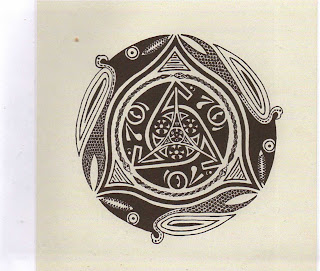 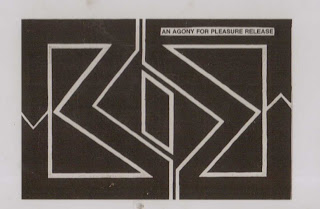 Have just spent a pleasant while listening to Tears Of Ochre (Unune). In July I wrote my thoughts on an old compilation cassette release called "Power To Destroy" on the Lebensborn label, one of the bands on there was Agony For Pleasure whom I likened to Konstruktivists and whose track I like very much. Transpires that the guy behind Agony For Pleasure is still recording but under the moniker of Tears Of Ochre (Unune) and Agony For Pleasure has gone from project name to project label. Googling Tears Of Ochre (and I suggest you do) brings up loads of video footage on You Tube. Through this I contacted Mr. Ochre (aka Stephen Hopkins) and received this CDr album shortly after.
The album is titled ""An Eternity In An Infinite Flash Of Grey". Track One: "A Tenuous Link In Thee Endless Knot" begins with oscillations, random bleeps and synthesized sweeps. The sound of communication amongst machines. A great opener. slowly paced and leads into "Arable Grazing For Parable Sheep" perfectly. A sense of Coil is building with varispeeded and effected voices and a slow dragging beat. The mood / style changes with "When Things Fall Apart", repetitive loops / locked grooves provide an annoying track - could be a style/genre called glitch. Will have to check that out! Track 4 is the Tears Of Ochre (Unune) magnum opus with "Harmony/Disharmony/Illusion/Disillusion/Urge/Demiurge". The track sounds like a Novocaine nightmare with its angular synth attacks, sharp and piercing and floating around the speakers. Power surges and rumblings complete the sound. Sucks you in beautifully. "Revenge In The Spirit Realm" sounds like looped EVP Recordings accompanied by floating electronics. "Blood Comes In Spurts" plays like a homage to Monte Cazazza's "Kick That Habit Man" with a strong pulse beat and distorted vocals. The Novacaine nightmare returns with "Cerebral Incursions", madness in the vocals and keyboards. With "Fatal Romance (Judas As Homosexual)" looped electronics create a dancing rhythm which bounces around superbly. The sound phases and modulates to create a sound pattern not too far from what Neil Campbell produces. "A Subconscious Repercussion" slows the sound down. A slow wall of sound. (SNW as I call it). The album ends on a slight "novelty" track called "Under My Skin (Like Rabies)". Guitar, lyrics and cardboard drums.
An eclectic album, but I think one that was compiled over a period of time, maybe years, (Could be wrong) but as a taster to the sound and talent of Tears Of Ochre (Unune) it makes me want to discover more. Hopefully Stephen will create an Agony For Pleasure base soon.
Recommended.