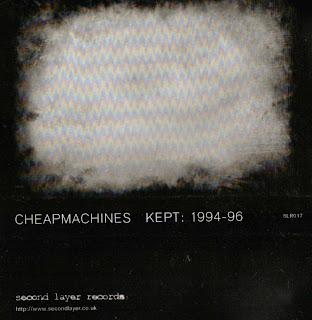 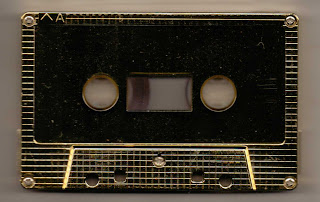 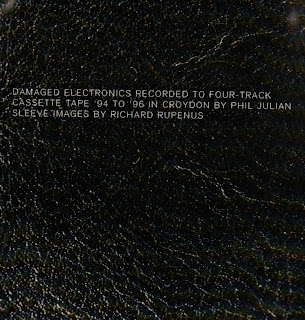 There seems to be a penchant for labels to be re-releasing / re-packaging old material from the 1980's and 1990's these days. Stuff that was ultra limited when it first came out now rediscovered and presented to a new audience...and a few of the old audience who have lost their originals or are on a path of youthful rediscovery. I am not complaining, personally I think it is great, especially when it works. (I am thinking of Harbinger Sounds' release of old Olympic Shitman recordings and live work). Second Layer Records have put out a cassette of the early recordings of Phil Julian, AKA Cheapmachines. The recordings were made 17 years ago; that's before HNW. 1994 when all noiseniks were Japanese crazy. There is no doubt that "Kept:1994-96" is a noise album. Blistering noise recorded and presented at a blistering pace. Side one is loud decay. "Damaged Electronics" as Phil puts it. Quite often the sound verges on implosion, a collapsed wall, but it is always brought back from the brink for another attack. A scholar from the legendary school of Putrefier. Side two starts off with a denser sound with hidden vocals in a morass of distortion. This is more Power Electronics than before. Track two is Musique-Concret. Durgan Country. Tape spool manipulation and kitchen implements contact mic'd through effect. Luc Ferrari. Excellent stuff. The second half of side two brings us back full circle and the sound / style /approach of side one. (No track listing here). There's a track with lyrics..not vocals, but lyrics. Can't tell what they are as they are masked by static noise surges and distortion but I'm certain they are lyrics. The tape ends on a tinnitus loop. Classic.
The cassette is gold and housed in a Richard Rupenus designed glossy sleeve. I'm not to sure of the edition run..probably 100 and available from Phil at www.cmx.org.uk and Second Layer Records.
Buy!