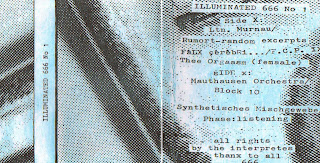 With the Broken Flag Festival coming up next year in London I thought it was about time I dug out some old tapes to refresh the ears and get used to that old 1980's noise sound again. I dug out Kliestwahr's "Myth", but wasn't in the mood for the chorus pedal/phaser sound. I played the compilation release "Harsh Ears Now!!" the triple cassette that Midas Music released but after 3 sides I found it hard to listen to. Nice tracks by Kapotte Muziek, Club Rialto and S*Core, but a lot of poor stuff even from the likes of Tools You Can Trust...hunting out Le Syndicat's "Rectal Struggle" I found the compilation "Illuminated 666 No.1", a C22 from 1984 (I think) on the German Illuminated 666 label. Le Syndicat'll have to wait....
The tape starts of with Ltn. Murnau, a project I know very little about. French? (I know I am thinking of Lt. Caramel here....are they related)? "Rumort-Random Excerpts" is an instruction on how to use a power drill; DC whilst mobile, AC whilst hooked up to a generator. It is the sound of a power drill. The beautifully named FaLX cerebRi follow. FaLX cerebRi was the project of mail and sound artist Karsten Rodemann who ran Graf Haufen Tapes. Back in the 1980's I used to trade tapes with Graf Haufen Tapes. Here FaLX have stood the test of time with two pieces. "Thee Orgaasm (femaale)" is classic industrial music. An electronic throb over/under/around a female German voice going through a digital delay. Side two has a long piece by Mauthausen Orchestra. "Block 10". A great symphonic noise. The sound is "muddy" in parts and sounds like it was recorded live on a 2-track, but it still has power and that is what is important here....sounds like Esplendor Geometrico around the same period. I am now going to work through the"Gravitational Arch Of Sex" box. I am not too sure but I think Mauthausen Orchestra are playing at the Broken Flag Festival. Certainly a crowd puller for me! The tape finishes with a short Non like piece from Synthetisches Mischgewebe (AKA Das Synthetische Mischgewebe). Excellent sharp sound loop. "Illuminated 666 No. 1" is a great release. I have no idea if there was a "No. 2" or what happened to the label.
Posted by Steve at 20:20