Hum Of The Druid 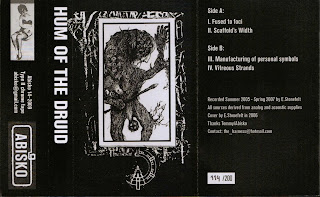 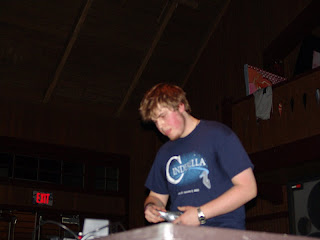 It was whilst looking through my diary for 1985, looking for Doctor Zarkhov's Waiting Room pictures and information that I stumbled across another "band" I was in that was crappily named. Contakt Mags. That lasted for a C60 one Spring weekend. Interesting to think that back in 1985 the mysterious use of "K" over "C" was still in use. The diary then became a fascinating read as I discover a page with potential solo project names listed. I was recording "on the side" whilst still a member of Ideas Beyond Filth y'see. TrippingKorpse Ritual...now there's a name that never was! I did (for a few months) plump for The Streetcleaner. (Now, punch the air. Then slowly draw the fist back into the stomach whilst shouting from the back of the throat "The Stir-Eat-Klee-Nah"). That name lasted a couple of tapes before adopting the A:A:K moniker. Strange year 1985.
Deciding on a project name is so difficult. My good friend and Dieter Muh collaborationist Tim Bayes is doing some location based recordings (LBR's in the trade) in Western Australia but the results are far from his "usual" sound as Schuster so he is trying to find an appropriate project name. Difficult. Still did Cabaret Voltaire change their name just because the latest release didn't sound like the last? It is a strange area. But back to crappily named bands, and one that stood out for me in 2010 was Hum Of The Druid and last week Tommy from Abisko in Sweden kindly mailed me one of their/his releases.
For some reason I associate HOTD with another crappily named project Tenhornedbeast. Don't know why? Probably read about them at the same time or something, but for me they are entwined. I remember reading an interview with the chap from Tenhornedbeast where he states the work of Wishbone Ash as a great influence. I thought that a brave statement. For me an "off-putter" but a brave statement none the less. I have yet to hear Tenhornedbeast. I have heard the collaboration with Marzuraan that Aurora B. released a few years back, but even then I was thinking "Wishbone Ash"! "There's The Rub", "Argus"...the chap should move down my way, they do "secret gigs" in pubs around Torbay.

Back to Hum Of The Druid. HOTD is the project of Eric Stonefelt and has been recording and releasing as HOTD for over 7 years. Abisko is the new label from Tommy C who used to operate Segerhuva Records. The tape is an eponymous C65 limited to 200 copies.
4 tracks of indistinguishable snap, crackle and pop. Side A starts with "Fused To Foci". A track of continual mechanical grind, no hooks no loops just a grinding noise. "Scaffold's Width" continues the grind. Side B: "Manafacturing Of Personal Symbols" opens with the same crunching and somewhat industrial sounding scrapes and grinds before the silence of "Vitreous Strands". The silence builds to a hum and grows into a mess of rumbling, crumbling noise...has a nice haunting voice at the end though.
One of the best things about this tape are the titles. "Scaffold's Width" sounds like a band that could have supported Wishbone Ash on their 1971 "Pilgrimage" tour.
I am not down on HOTD though, they just do not sound like their name suggests. I have the compilation CD "Night Science 4" with the excellent track "Gammadion Rotates South" included, I think there are many sides to this project. The HNW side just doesn't press my button.

Pictures:
1: Hum Of The Druid Sleeve.
2: Eric Stonefelt Live. (Picture taken from the Internet).
Posted by Steve at 20:13