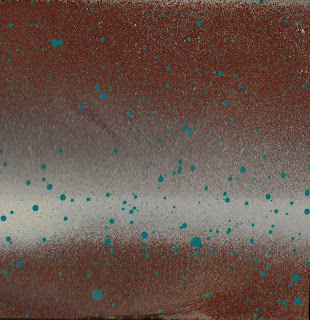 Just spent a pleasant while listening to the latest cassette by Hobo Sonn + Duncan Harrison. This one has been produced for the upcoming February tour of the U.K. and both have a side a piece. (I don't think it is collaborative). As is the latest trend these days, the tape carries NO INFORMATION other than who is on which side.
The tape is recorded over a pre-recorded tape. The copy I have used to be a compilation tape given away with "Q" Magazine, it is an idea also used by RRR Records with their "Recycled" series and of course Hyster Tapes of Helsinki. Good idea, but lo-fi sound which with the Duncan Harrison track is probably not such a good idea. I am not adverse to tape hiss. "tape hiss is essential" as The Instant Automatons used to say, but it does play an unwelcomed part of the Harrison track. Low drone, minimal shifting and a faint murmur, reminiscent of Nurse With Wound.
Hobo Sonn provide (what I think are) three tracks. The first is very strange.
I have mentioned before, but 16 years ago Dieter Muh supported Soviet France in Bradford. Unfortunately we had no means of recording the gig and thirty or so minutes into the performance, and all is going excitedly well, I realise that I have a tape machine in my pocket that I wasn't using anymore, I had used it on the first two numbers but it went into the jacket pocket. So I pressed play/record and I now have 10 or so minutes of Dieter Muh live in Bradford 1995. Unfortunately it is an indecipherable murky cotton wool mess of sound with the occassional "clang" of the Tibetan Bell I was hitting. Unusable and pretty damn near unlistenable. The first Hobo Sonn track reminds me of this tape. A walk down Brighton High Street with a tape recorder in the armpit. Low quality sound on a low quality tape, I was in two minds to FF when all of a sudden (track two) I'm listening to crystal clear synth-sequencer keyboards and guitar a la Camel or Be Bop Deluxe. Crazy shit indeed. Track three is piano and flute.
The live sets will be interesting. I know the tour takes them to Leeds, Glasgow, Edinburgh and Manchester. Pop along and get one of these tapes!