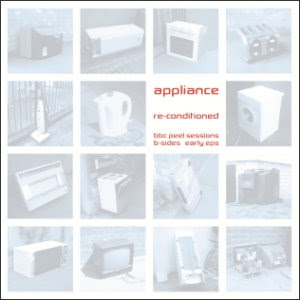 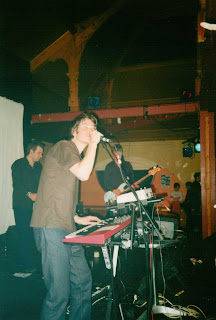 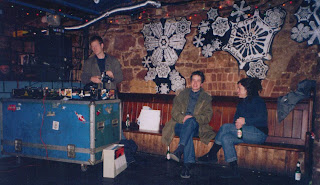 Just spent a pleasant while listening to the triple CD set "Re-Conditioned" by Appliance. (RROOPP Records : rr03pp. 2010).
I like Appliance, not all their stuff but a bloody large chunk of it. Ten years ago as they were releasing the album "Imperial Metric" I started to "go out with" the bass player's sister; Tamsin. I got to hear a fair bit of Appliance and I (immediately) liked what I was hearing.
"Re-Conditioned" is a great "career over-sight", taking in the classics, the unreleased material as well as some pretty dodgy tracks. Tracks that probably sounded good in demo form but not after studio production. The first CD covers the four sessions they recorded for the John Peel Show, and this is a great introduction to the Appliance sound. Motorik rhythms, swirling guitar chord riffs, minimal but solid bass lines, catchy lyrics - often surreal always poetic - and distant tweebles and warbles. There are times when listening to these sessions I am drawn into the world of Krautrock. The driving sound of Can and Neu! and Amon Duul. The beat. It is the beat that does it. I get the same sense of joy when I listen to certain Stereolab tracks. Appliance are a lot like Stereolab.
Disc 2 is compiled of previously unreleased material and single B-Sides. Shame it is not the A-Sides as Appliance released 2 of the classic singles of the "noughties": "Land, Sea & Air" and "Go Native".
When Mute Records sold itself to EMI / Sony a few years back they "dropped" a lot of there artists, Appliance were one of those artists although they still own Appliance material - perhaps that is why RROOPP only have the B-Sides, Mute Records are waiting to see if their is a resurgence of (market) interest in Appliance and out they come with the re-issues? Since the early 1990's Mute Records has become a "re-issues" label, so who knows....
Disc 2 does contain one of the worst songs I own (and now I have it twice) "Nocturnal Walker".
Disc 3 is a compilation of the first 3 10" EP's and are presented in reverse order. It is one of those discs I can put on and just slip into a journey, let the mind wander and the music be the soundtrack. Beautiful stuff.

I recommend this release.
My favourite Appliance release is the LP "Imperial Metric", it is an all thriller/no filler mother of an album and a permanent fixture in the Hartop Towers all time top 20 albums playlist. I saw Appliance perform the album live at The Spitz Club in London in 2001, and after the gig bought the CD there and then. I liked it so much I bought the ruler! (and married the bass player's sister).
"Re-Conditioned" is available through Amazon. Buy it!