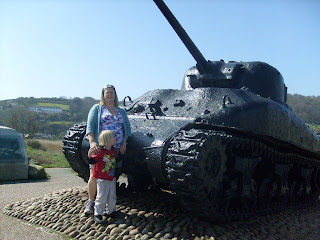 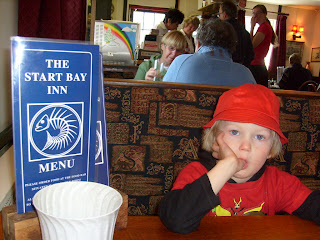 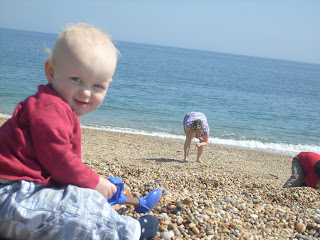 Acting as a guide to Devon....if ever in this neck of the woods I do recommend a day trip to Torcross. Situated in the South Hams, just down the coast from Dartmouth and East of Plymouth. The scenery is breath taking, and is a noted area of outstanding beauty in Devon. Head for Strete and there is a winding road down the cliff to Slapton Ley where the thin road has a huge lake on the right and a shingle beach on the left, and at the end is the small hamlet of Torcross. (3 pubs, 1 post office, a church and a few holiday homes). The beach itself is about 3 miles long...stunning. The view is the open sea with Start Point lighthouse to the right and Blackpool sands to the left.
We arrived early and ordered our lunch at the Start Bay. Excellent veggie menu and quite reasonable.
The beach is "famous" for the WW2 catastrophe that was Exercise Tiger where a thousand American marines died in a D-Day training exercise. The beach is similar to that of UTAH beach in Normandy, so the locals where shipped out and the US Army were shipped in, but during the training German E Boats spotted the US boats and torpedoed them and at the same time the British Army where firing live ammunition at the marines (on orders) so they knew what "real warfare" would be like. Crazy but true. Most marines died of hypothermia in the sea awaiting rescue and a lot died because of ill fitting life jackets that turned the soldier on his stomach so he automatically drowned. I am not making this up!
There was a UK + USA cover up for years, until local man Ken Small surfaced a USA Sherman Tank and built a memorial for the dead.....Fascinating stuff.
On the opposite side is the expansive Marshland called Slapton Ley. Lots of ducks and geese and swans etc. Also lots of midges, so we kept clear.

Like I mentioned, if down this way and need a place to chill with a reasonably priced pint - visit Torcross.

Pictures:
1: Tamsin & Oscar at the Sherman Tank memorial.
2: Oscar at the Start Bay Inn.
3: Isabel, Tamsin and a partial Oscar on the beach.
Posted by Steve at 21:02