Godiva Rocked To A Backbeat 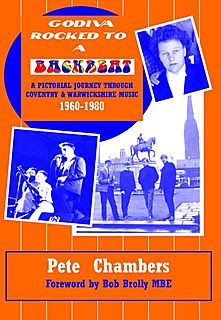 Coventry. I spent a long weekend in Coventry in the summer of 2005. Tamsin and I were in the area for a wedding and we decided to stay an extra couple of days to experience the city of Coventry. Mistake. Coventry can be experienced in a few hours. Nice cathedral, stained glass work is stunning and a walk around the old cathedral ruins was pleasant, but that was all Coventry had to offer. No independent record shops or secondhand vinyl sellers....It was a long weekend. Somewhere on the outskirts of the city there was a field that hosted a "free festival" whilst we were there. One of those days run by the local council. Local bands, local beer and food, Police motorcycle display team etc. There was a comedy tent where Adam Bloom headlined and Michael McIntyre was bottom of the bill - that was entertaining...but not why I am writing here.
Whilst going around the city centre we chanced upon a book shop that sold graphic novels (the sort that Tamsin likes) and I saw the book "Godiva Rocks", a history of Coventry music from the 1960's through to the mid 1980's. It looked interesting, but for some reason I didn't buy and regretted. Until. I found "Godiva Rocked To A Backbeat" the second edition of "Godiva Rocks" by Pete Chambers the other week.
Peter used to write a music column called "Backbeat" in the local Coventry paper "Coventry Telelgraph". The book is a page-by-page directory of all the bands he featured in his column. Fascinating stuff. The 60's is all beat groups and rock n' roll bands, a lot of them cutting the one single for Pye Records or Decca before sinking in to WMC + oblivion. The 70's and Coventry was alive with prog rockers like The Rainbows (big in Germany) and Fagin Quill, also chart toppers Lieutenant Pigeon and Peter Waterman! Lieutenant Pigeon were an offshoot from the fantastically named Stavely Makepeace - a serious rock band. I didn't know that, and as information I find it fascinating. Then we go in to the 80's with The Flys, Eyeless In Gaza (OK they're Nuneaton but the "Telegraph" had a wide readership), Squad, Criminal Class and (of course) The Specials. For two days this book was unputdownable and made me smile and titter on many an occasion. Recommended.

I like local papers - rather like local news bulletins - I find the perochiality highly fascinating and amusing. I think it is just me......When (in 1997) I returned to Lincoln I wanted Dieter Muh in the local paper; "Lincolnshire Echo", and succeeded when I went in to the offices and demanded to see the Editor of the "music page". I was advertising the recently released "Black Square" CD + our show at Grafton House. There was some young lass sat at a desk making feverish noted whilst i rattled on about Muh history, name dropping and giving here some sort of picture as to how huge we were! Poor lass, probably only took the job for free CD's and tickets to the gigs at Rock City....to me it was mission accomplished when there was a column on the page about Dieter Muh. (A better feeling than being in "The Wire" I can tell you). Same when I moved down to Devon. I got in touch with David Lowe of "The Lowdown" column in the Torbay local "Herald Express"...I wish I had the clipping as he called me a genius!