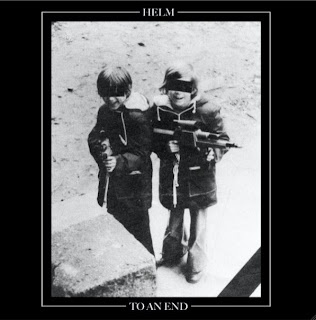 I must say that I had heard of Luke Younger but had not heard any Luke Younger, the same as I have heard of Birds Of Delay but not heard any Birds Of Delay. I even have a sneaking feeling that I have met Luke at a gig in London, maybe TG in Heaven or Con-Dom in Stockwell? Either way when buying this LP I had no idea it was the work of Luke. What attracted me was the cover. It just simply jumped out at me. It has the look of an LP sleeve of the mid 1980's. One of those albums I would see in Fon Records or Eastern Bloc (when it opened on the top floor of Affleck's Palace) one day, scrape the pennies to buy and it would be gone on returning. Looks like an album by Pornosect or Tibetan Red or Seven Horns Da Ho or MB. You get the gist.
I do sometimes buy on the way a record/release looks. Discovered BBBlood and Pogrom recently that way.
The vinyl does not let the sleeve down. "To An End" on Alter/Peasant Magik is one of the best albums I have heard in a while - certainly this year. A very satisfying feeling, like when I heard Aaron Dilloway's "Infinite Lucifer" last year - a hidden gem. "To An End" is two long (untitled) pieces. Side One starts with a cough. A clearing of the throat. I've not got many records with coughs on - Derek + Clive and The Hysterics spring to mind, but this is the best record I have with a cough on it. For the next twenty odd minutes the cough is transformed and modulated through a manner of effects whilst scraped strings and other "magical sounds" weave in and out. Whilst sitting listening I was reminded of the Psychic TV "Themes" series, as well as Organum and early Column One work. When the piece finished I was left with that feeling: How the hell did that journey begin? I love it when that happens. Side Two is a more of a meaty drone piece that would not be a miss on a Soviet France LP (think "Eostre" or "Shouting At The Ground"). It sounds live, at some points on the point of disappearing in to a wall of feedback, sometimes like it is going to collapse - it ends in some mechanical breakdown. Once again, the needle hit the record for a second trip. Excellent stuff.
Now I want to hear more Luke Younger stuff. I've ordered the split Birds Of Delay / Family Battle Snake 7" from Tome Records...