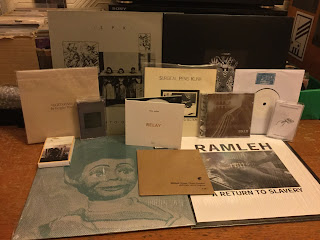 This programme is mainly built of new releases that have come through the door of MuhMur Radio in the past couple of weeks. Stephen Cornford's "Pinched Tapes #1" on Geräuschmanufaktur label starting the proceedings … A (nearly) 15 minute piece combining a John Cage string quartet and a found story tape of "Jack & The Beanstalk". Originally released in 2009 on ArtEx Sonora. The tape manipulations follow with a piece from Stuart Chalmers pulled from the excellent "split" CD with BBBlood + Posset. Phil Julian recorded the air conditioning in a New York hotel and turned it into a sonic masterpiece! The Peter Fengler track is from a limited one sided lathe cut 7", hence the lo-fi sound.
April saw the release of the new LP from Aaron Dilloway. "The Gag File" on Dais Records. Side A ends the broadcast. A great discovery over the past couple of weeks has been Filtro. An Italian project on Upside Down Recordings. I know little about this project - and big thanks to UDR for mailing it!
37 years ago to the day SPK released "Mekano / Slogun" on Industrial Records.

Last weekend I met up with J. Karpov of MNEM in London. I have known Juri now for nigh on 20 years, and seeing that he was close by (in Leuven, Belgium) we decided to meet halfway (in London) for a tour of London's secondhand vinyl shops and pubs. It made me dig out my copy of the MNEM CD "For Delta Relics" and play a track. 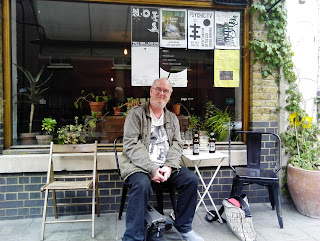 Drinking at The OTO with Juri Karpov.

Take a listen to the broadcast here: (Copy & Paste).