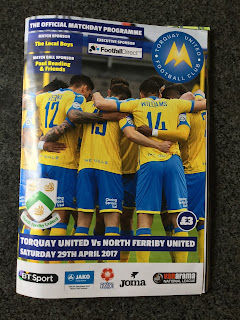 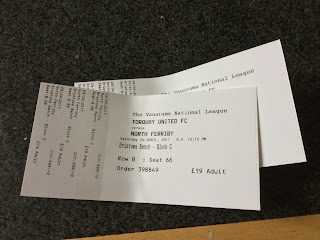 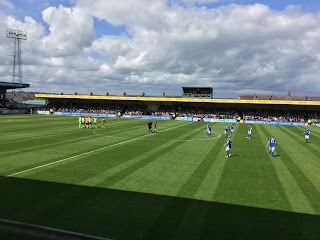 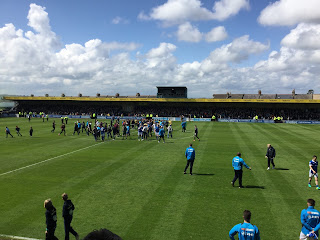 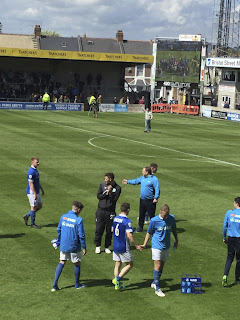 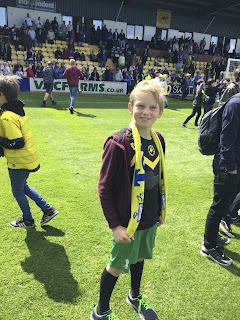 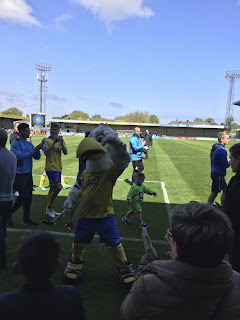 So it has come to the final match of the season, after a fair to middling start and a disastrous middle to end, Torquay United need to win to stay in the National League, The Conference as us old men call it. Lose or draw and their fate was in the hands of Guiseley York City and Braintree United. Squeaky bum time indeed. There is also talk (locally) of Torbay Council selling the ground and Torquay United moving to the outskirts of town. Relegation would only speed up this process. (At the time of typing Torbay Council is run by the Conservatives & UKIP).
Todays opponents were the already relegated North Ferriby United. I like North Ferriby, a lovely little town on the route from Goole to Hull, being in the National League was them obviously kicking above their weight…..
And Torquay United won. A quite convincing victory. For the first time (I have seen) this season Torquay United played well. Kept the ball on the ground, passing in triangles, through the passages and in to space. Tracked back and kept it all tight, fighting for the loose ball and no fancy dans or showboating. Really good stuff! For Torquay United Rowe-Turner, Aman Verma and Myles Anderson kept a tight defence, a wall and Jordan Lee in midfield had (probably) his game of the season. The one player who seemed out of sorts was Brett Williams. Lacklustre, not wanting to chase the ball or get it back when he lost it (very easy to go to ground). I couldn't work out if he was a centre forward or playing in the hole or even centre half. He did have a cracking shot - a 25 yarder - that hit the North Ferriby woodwork in the first 10 minutes or so, but after that …. Still, the win was a great team effort with great headed goals from Verma and Anderson.
The first goal (in the second half) saw a wild pitch invasion, flares and policemen running around like headless chickens. Never seen that at Plainmoor before!
North Ferriby did have a couple of decent players who'll probably be moving on .. Connor Oliver in midfield and Sam Topliss as a right wing back were handy, it was just Torquay United were on top of their game.
And at the end of the match there was the obligatory and good humoured pitch invasion. Players held aloft, chants of the managers name and the great "We're Staying Up" as if playing shite most of the season but well in the final 3 games was a reason to celebrate. This match was Torquay United's cup final! And we shall return next season (Oscar my erstwhile companion) but this time I'll make sure we're in Bristow's Bench (stand). I had never been in there before but the Family Stand was "Sold Out" so I had to pay a little bit extra - but what a view! The twin spires of St. Marychurch and Hay Tor (on Dartmoor) in the distance, glistening in the sunshine and clear blue sky. majestic.
So, to next season - bring on AFC Fylde, bring on the "O's".