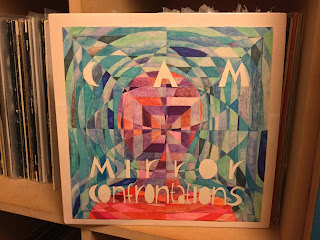 This time last month I had never heard of CAM, and now I can't get the LP off the turntable.
My awareness came courtesy of Claus Poulsen. One third of CAM. I have been listening to the works of Claus for a few years now, his involvement with Small Things On Sundays and Star Turbine as well as his solo releases through Beartown Records, Striate Cortex and Sheepscar Light Industrial. Claus (to me) is similar to Anla Courtis who seems to release regularly (either solo or in collaboration) on a plethora of compact and bijou labels. And now there is CAM.
Apart from Claus CAM is comprised of Anders Berup and Mads Bech Paluszewski-Hau. New names to me but then again I am not too au fait with the Danish experimental abstract free-improv. electronic scene. CAM were created in 2009 in Copenhagen and "Mirror Confrontations" follows their debut LP "True Or False?".

First couple of plays had me thinking that I'd never heard anything like this before, or if I have it was a long time ago. There are some musical references, certain sounds evoked Storm Bugs and very early Clock DVA, but then again there was a synth sound that made me think of an old Greenslade album. Then after a time a story / concept / journey appeared and what was (at first) noncognitive now seems to make some sense….where perhaps it shouldn't? "Mirror Confrontations"  is comprised from improvised recordings made over three months in 2015 / 16. This is the album I am writing about.
The first two tracks play as one, like an introduction. "Foetus Part One" begins with low groaning and moaning, an awakening with scratched strings and a slow arriving pulse beat. The whole piece sounds like it was recorded next door to a drum & bass party. Anders is credited with "LFO Madness", it is well in evidence here with a shape/less form/less cacophony. Only one place to go .. out of the room, along the corridor, out of the building. Footsteps pass speeding traffic and neon blur and the voice in the head asks for "A Place To Go".
Silence.
Side A ends on "In-Between". A Billie Holiday on acid flashback nightmare, a street brawl, a fist fight with feedback moving through the dimly lit neon night.
"Amazing Greys" comes from a different space. A black & white soundtrack to a 1920's silent sci-fi movie. Machines are keyboards that assemble themselves at dawn and prepare for battle. Improv' electro jazz scratch fever. "Mirror Confrontations II" and the voice in the head returns as a drunken bar-fly. "Mirror confrontations in the afternoon" (vocals very similar in style to Storm Bugs here). The sound is an inward collapse finishing on a decreasing heartbeat and dying breath.
"Closer To The Tree" closes the album with a spiritual rise. An outpour of realisation. Huge electronic symphony. The story's end.

It is certainly the case that I heard a different narrative on the first few plays and chances are that narrative will change the more I hear it. Repeated listening is required. A bloody good album. Not one for the harsh noise lovers or techno-beaters, but if your mind and ears are open then this is definitely to be heard.
It was released by Danish label Skrat Records, so probably available through them, but try the CAM website : www.triocam.dk I don't know but Infinite Limits or Alt.Vinyl might carry copies in the UK.