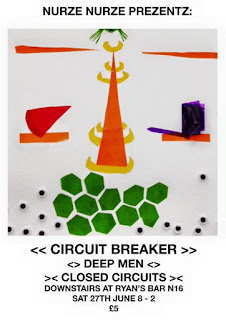 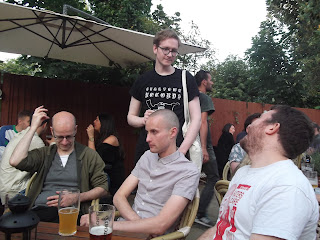 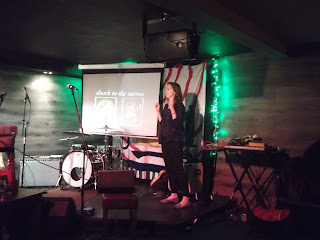 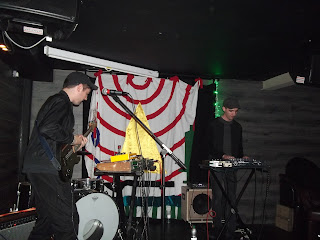 Earlier this year, March to be exact, my old friend Steve Underwood told me about Circuit Breaker. He had seen them support Sleaford Mods in Milton Keynes and he was bowled over, so much he wanted to put an album out on Harbinger Sound. A weekend spent in Nottingham and it was all he talked about - and all he played. The 12" EP on Tombed Visions and the cassette "Grid" -of which I'd be lucky to get a copy. To me Circuit Breaker evoke the sound of early 80's experimental post-punk synth music. Robert Rental, Eyeless In Gaza and Cabaret Voltaire. The music is similar but not copyist - more advancing the plan. 21st Century. I too have fallen for the sound - on returning I bought the 12" EP and got a copy of "Grid" (I am a lucky guy).
Fresh from the German tour with Sleaford Mods & Sudden Infant, Circuit Breaker played the compact and bijou venue of Ryan's Bar in Stoke Newington. It's a venue I like, although the PA is never loud enough, I had to witness the live sound of Circuit Breaker.

The evening was organised by Nurze Nurze aka Lisa Lavery from Melge. I met Lisa last March when we were both drumming for Vagina Dentata Organ at Tate Modern.
An addition to the evening and first on was Emilie Gautier. A talk on the trauma in the works of Thomas Hardy, be it characters or landscapes….or at least that is what I think was being talked about (I missed the opening few minutes). Emilie got my attention but it was a little like a job interview or walking into some book publishers office. It was the next day on the journey home that I realised that this was a brilliant "support", a great idea. Like a salon event or cabaret of old …
The following two bands / artists were not my cup of tea. Closed Circuits came across like a Karaoke act. Some guy with too many Scott Walker records and Deep Men were loud, brash, amateurish and slightly annoying. But at least I wasn't in some basement with a load of noise-nerds wearing their freshly ironed Iron Fist Up The Bum T-Shirts and watching some youth with a laptop and six effects pedals making a noise, with everyone nodding like he's just re-invented the wheel or something. Deep Men had guitars and drums …
Circuit Breaker played a short set. No let up from their recorded output. Perhaps more subdued tonight. A week journeying around Germany with the Harbinger Sound Travelling Circus & Freakshow can take its' toll. Perhaps it was because there was only a dozen folk watching? Excellent set though - I recognised "Grey Materials" from the 12", but little else. The forthcoming LP is something to look forward to.