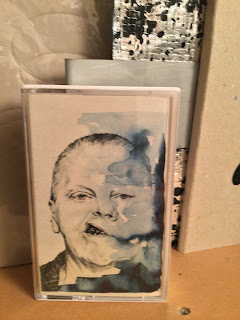 I have just spent a pleasant while listening to the debut release of Dan Olsson. "The Creature From Outer Space" is a single sided C90 on the Half-Night label.
Not what I expected (as Crispy Ambulance once said). I heard about this release via Æther mainman Jonas Lindgren, he posted an advert for the tape on his Facebook page. I have come to love the work of Jonas and his Æther project, also his collaboration with Michael Idehall as Amalthea. Their deep drone, ritual and trance like releases have been continual here at Hartop Towers. Not that it should be, but "The Creature From Outer Space" is nothing like these two projects.
"The Creature From Outer Space" is a soundtrack to a film I have yet to see. I checked my Dennis Gifford book of horror movies and then run a check through IMDB and there is no film called "The Creature From Outer Space", so it is either a film yet to be seen outside the world of Dan Olsson or a film of the mind, but it is definitely a soundtrack album. Eleven pieces with titles such as "Travelling To Earth", "Research Team Arriving Strange Landscape" and "Death Of Jane" depicting scenes or scenarios. The sound is quite intriguing with synthesisers and modulators mixing with strings, piano and whispered voice. It all makes for a great listen. As with most "soundtrack" albums, the pieces remain largely under-developed and in some cases the track just cuts off "dead" - when it could have carried on (and on), but I suppose there was a "scene change".
Memories of Pink Floyd and their "More" LP and sometimes Clock DVA with their "Alternative Soundtrack To Texas Chainsaw Massacre" but over ridingly Robert Haigh and Sema.
I am interested to hear Dan's next release …
The cassette is limited to 80 copies only and available from www.half-night.bandcamp.com and like all tapes these days it comes with a free download code.
Posted by Steve at 16:03