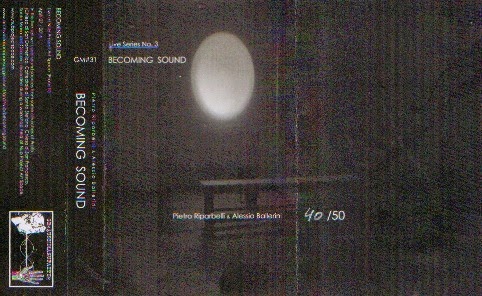 German label Geräuschmanufaktur have just released the C40 cassette "Becoming Sound" by Pietro Riparbelli and Alessio Ballerini. I first became interested in the work of Pietro Riparbelli after seeing him live at The Equinox Event at the Conway Hall in London 2008. He was performing as K11, and promoting the "Voices From Thelema" CD on Aurora Borealis. A great gig. Alessio Ballerini is a new name to me. He is part of the project; El Cijo.
Riparbelli + Ballerini operated a workshop inside Nub Project Art Space in Prato, Italy. Then using the sounds recorded there and from churches in and around Prato performed live later the same day. (April 27. 2014). I have been playing the tape on a daily basis this week, fascinating stuff - hearing different sounds on each play. Side one (I think) is mainly "workshop" derived material with shuffling and voices giving it all a very "E.V.P feel". Ambiosonics as Adi Newton would claim. The mixing and mixture of acoustics giving the piece a unique texture. Side two is a heavier affair and probably (largely) culled from the live performance. There's a lovely guitar sound and electronic drone and a fluctuating thumping beat bringing the sound of Maeror Tri to mind and then about halfway through it transforms into this new-age rave type music with polyphonic key chords and Hillage guitar … none too pleasant. Luckily before the side ends the sounds transform back into the workshop sounds of side one.
I have a similar record in my collection. "Collected Spaces (First Listen)" by Ultra Red/Art Angel/Tin Roof on Public Records. On this LP there is a collection of workshop recordings taken from spaces around Dundee then taken and used in a public performance.

"Becoming Sound" is number three in a series of "Live" recordings. The Dead Mauriacs and Fantom Auditory Operations preceding this tape. Geräuschmanufaktur have an interesting catalogue with the likes of Vomir, Francisco López, Michael Esposito and C.M. Von Hauswolff on the books. Worth exploring: www.gerauschmanufaktur.bandcamp.com
Posted by Steve at 13:45