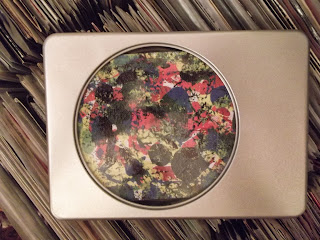 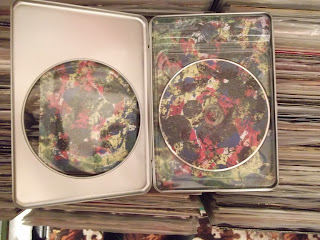 One of the great surprises of 2013 has been the reemergence of Tactile. Silent since the release of "Bi-Polar Explorer" on the Else Product label in 2008. This year has now seen two new Tactile albums. Earlier this year came "Assault on M19", and now there is "Logics Of Disintegration". Both titles are on the Sentrax label and available at www.sentrax.co.uk - paypal available.
"Logics Of Disintegration" is a CD limited to 75 copies only and is presented in  metal case (with postcard). 40 or so minutes of pure noise. As head Tactlian John Everall says; ""Logics Of Disintegration" is, in my way, my "Metal Machine Muisc" moment." and indeed it does sound like the seminal Lou Reed LP - I haven't heard that album for over thirty years but I think my memory serves me well.
High end synthesized noise loops (infinity ring modulator) layering across and against each other and a bank of guitar-wall noise and amplifier feedback. Clear as a bell - no distortion....for 40 minutes. Immediately the early works of Boyd Rice (Non with Turman) and Whitehouse spring to mind ...
An art piece? A curio? Concept album? If you want to hear how the sound of Tactile has developed and progressed during the silence then I strongly recommend "Assault On M19". If you like noise then bag this album now.
Hopefully Tactile live dates will follow ....
Posted by Steve at 14:35