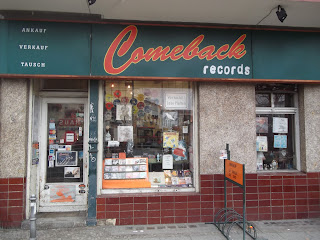 Berlin is a beautiful city to go secondhand record shopping in but there is a problem, the problem (for me) being that the shops are not in one district but spread across the (huge) city. Underground train travel is cheap...very cheap...but I was in Berlin when it was -5 degrees and snowing so I stuck to the Neue Koln area and found "Comeback Records" on Hasenheide (Just off Karl Marx Strasse). The shop is mainly rock stock but had a fair supply of "New Wave" where I saw Shoes For Industry, Miller/Rental, Coil + Motor Boys Motor albums all going for a decent price (between 5 and 10 euro). There is also a few boxes of 7" singles under the racks ... under the racks! I have pensioners knees, the days of being on all fours in record shops flicking through vinyl for a rare Metabolist 7" or a copy of "I'm In Love With A German Filmstar" by The Passions are passing. I recommend visiting the shop if in Berlin.
The same day I also found a shop called "Cortex" on Orienberger Strasse, but it was mainly GBH/Nirvana type "punk".....
I also visited a flea market in the Tiergarten that operates on Saturday and Sunday mornings..I saw an Anima LP and Hansa-Plast LP that I wish I had bought, but my bag was full after shopping at Daniel Lowenbruck's "Rumpsti-Pumpsti" shop which is a must if you are ever in Berlin .. but more of that at a later date.
My next visit to Berlin is in June, hopefully the weather will be more conducive to secondhand record shopping...the shops are out there ...