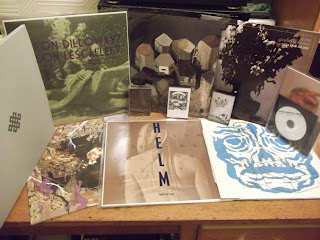 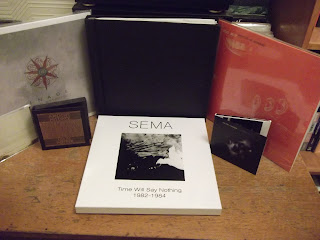 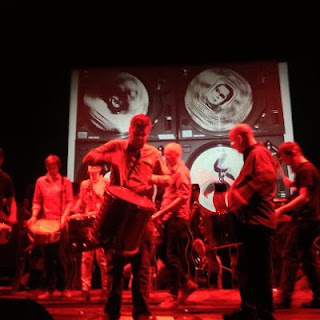 Something that seems to becoming a regular item at the start of the year ... I thought I'd go with it again this year. To call out the title of that great Crispy Ambulance 10" single yet again, it was "Not What I Expected". The moment that surpassed all was the birth of Edgar Richard in September, he is now reaching five months and is growing healthily into a fine boy....But, we are not hear to read of such things!! At the start of the year I didn't think I would be drumming on stage at The Arnolfini in Bristol with Vagina Dentata Organ. I should say that it was an ambition come true, but it was never an ambition - it was so "out of the ball park" in the realms of possibility that even now five weeks later I find it hard to believe I was there doing it. Going to Berlin to see Vagina Dentata Organ perform (in March) was more than I could have wanted ....
Dieter Muh executed their usual brace of live performances. It was an honour to be asked to play the Rammel Festival in Nottingham, the results of which should see the light of day soon on Feral Tapes. I also flew over to Stockholm to play alongside Contrastate at The Fylkingen. I love Stockholm, I love The Fylkingen...and this time I had time and money to relax, shop and drink. Great fun...also meeting up with old friends and meeting folk with whom I had only corresponded in the past...It was in Stockholm that I experienced one of thee greatest evenings I had been to in a very long time. It was an evening presented by The X Club in a strange industrial wasteland called Hokarangen a few miles out of Stockholm. It was an evening dedicated to the dream-machine. There were live performances, film shows, audio-visual DJ sets as well as sound mixes, video installations, cheap booze and an altar to Brion Gysin. It was so relaxed with everyone smiling, chatting, drinking. Superb. I wrote about this evening in April.
I got to see Giancarlo Toniutti, Club Moral, Esplendor Geometrico. That was ambition realised. I also got to see international noise artistes The New Blockaders live four times. Now I didn't expect that to happen at the start of the year.....
Release wise, Dieter Muh released their first "studio" album since 2008. "Heterodoxie" was released by the German Verlautbarung Records label in May. I am very proud of the LP.
Out of the blue and chance happening, I began broadcasting my own radio programme on Dartington based community based FM radio station "SoundArt". Again, this is something that I just could not have imagined at the start of the year. I enjoy this so much!

That's roughly about all.....I sincerely hope that this year pulls as many surprises out of the bag...